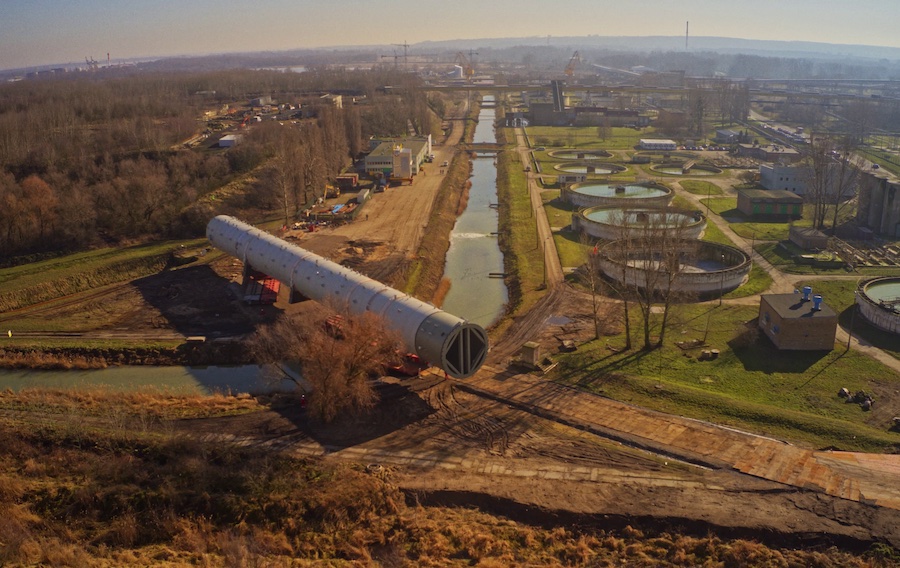 Tasked by Polish company Grupa Azoty, one of the main players on the European fertilizer and chemical market, Mammoet recently completed the first scope of work that will lead to the construction of the propane dehydrogenation and polypropylene (PDH/PP) blocks of its client’s chemical facility. The project took place in the town of Police, in the northwest of Poland, and involved the lifting and transport of more than 480 items from a small port to the construction site six kilometers away.

Among the items transported by Mammoet, 5 were extremely large with a weight between 600-800t, and the largest was around 900t. As a big part of the trip took place on public roads, it was crucial to make sure that all the permits were in place and the route was ready to take the large weight of the transport. In quite a few areas, it was necessary to make modifications. A RoRo ramp was built, bypasses were created, roads were widened, electrical wires were taken down and placed underground, and lamp posts were removed and later replaced with newer ones. The biggest task of all was to build a bridge that could hold 650t of weight.  “As part of the route, we had to cross a 20-meter-wide channel and for that, we needed to build a bridge. Seeing that bridge complete was one of the highlights for me,” said Jakub Walasek, Branch Manager for Mammoet Poland.

Mammoet used PST’s and conventional axle lines for the transport. The largest item, called the polypropylene splitter, required the use of two times double 16 axle lines PST’s in dolly configuration with turntables. In Poland, Mammoet has a team of seven, five of whom were directly involved in this project. For the transport itself, they were joined by colleagues from the Netherlands, Germany, Belgium and the UK, who did the final checks on the route and made sure all the items were transported safely to the construction site. The next phase of the project that will involve the installation is coming up later in 2021.