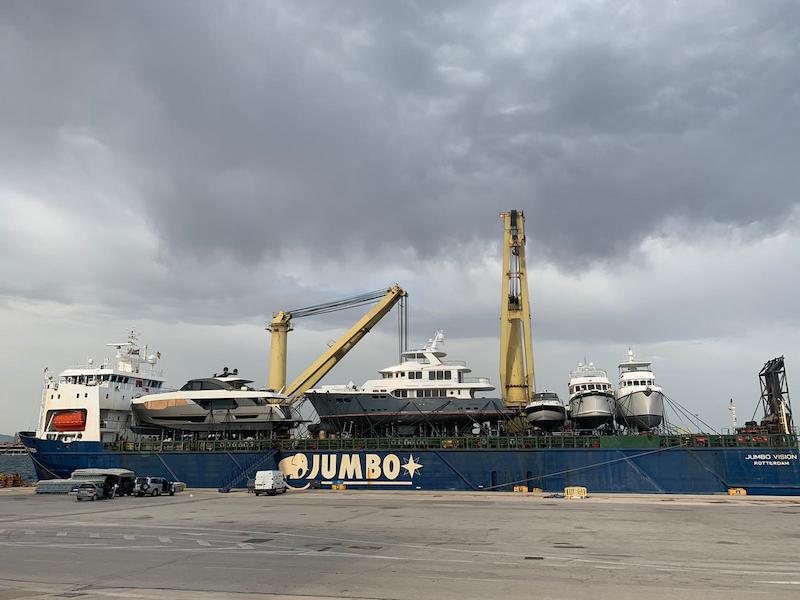 Jumbo Vision, loaded with multiple cargoes for multiple clients from ports in Spain, Italy and Greece, has recently arrived in the USA with loads bound for Florida, Louisiana and Texas. One of Jumbo’s H-800 class vessels, the 110-metre Jumbo Vision carried five separate cargoes. The first load consisted of three 173-tonne transformers, the second load was a 368-tonne urea reactor, the third load was an 87-tonne high temperature shifter and a 23-tonne methanator. The fourth and fifth loads consisted of no less than nine yachts, a contract from WeShipYachts. The cargoes, for several clients in Spain, Italy and Greece, were all loaded into the 11,000m3 hold and onto the 1,500m2 of free deck space.

“Of course we are well-known for our super heavy lift and offshore installation projects, but we also have smaller, versatile H-class ships, each with two 400-tonne cranes and operating on the worldwide spot tramp market. With them, we can be extremely competitive,” says Jumbo’s Regional Commercial Manager Martin Breucha.

An interesting detail was that, in between loading the cargoes destined for the USA, Jumbo Vision also picked up an inter-Europe load, taking a 230-tonne mobile crane from Malaga along the coast to Motril, Spain.