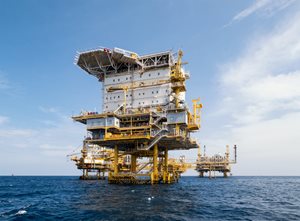 Friends of the Earth has issued a legal challenge to the decision by the Department of Trade to invest USD 1 billion in a major gas project off the coast of Mozambique.

The environmental campaign group has issued a claim in the high court for judicial review of the decision to invest and is seeking a declaration that in doing so the government acted unlawfully.

The offshore deep water gas production facility 50km from the coast of Northern Mozambique is being developed by Total, which has described the project as equivalent to a “12 billion barrel oil field”, where it aims to extract 43 million tonnes per annum, up to four billion cubic feet of gas a day.

Gas will be extracted from 20 wells at sea and transported via a 40 km pipeline to a 17,000-acre onshore liquid natural gas (LNG) facility. At Palma Bay, major port facilities will be built including jetties and berths, a multi-purpose dock to support heavy equipment and materials, a shipping lane and the pipeline corridor.

Inland, there will be an LNG processing plant, worker accommodation facilities, construction areas, access roads and an airport. The processing plant will produce between 3,000 and 5,000 barrels of LNG a day.

Friends of the Earth argues that the government has breached its own policy by agreeing to fund the project in breach of international standards on the environment and human rights, as well as by failing to disclose its assessment of the impacts of the project. It is also argued that such an investment failed to properly consider the Paris Agreement.

The Paris Agreement requires the UK to sharply and quickly reduce its investment in fossil fuel infrastructure.

Friends of the Earth also argues that the investment will have significant human rights impacts as well as environmental impacts which have not been disclosed by the government.

Mozambique ranks 181st out of 187 countries in the most recent UNDP’s Human Development Index and is already suffering the impact of climate change. In 2019, for the first time in recorded history, two severe tropical cyclones hit Mozambique in one season.

Friends of the Earth says there will be immediate environmental implications in building the offshore and onshore facilities, such as dredging, installation of a sub-sea structure, jetties and docks and the destruction of wetland and estuarine habitat and the relocation of fishing village populations.

It is calculated that the construction phase alone will increase the greenhouse gas emissions of Mozambique by up to 10 per cent by 2022.

The claim for judicial review is on the following grounds:

Will Rundle, of Friends of the Earth, said:

“The climate hypocrisy of this government is astounding. On the one hand it claims to be a climate leader and on the other we are providing $1 billion in tax-payer financial support to new gas mega-project that will sabotage all our efforts to stop climate breakdown. Mozambique is one of the poorest countries in the world and its people are already struggling to cope with climate impacts.  A vast new gas project is incompatible with the Paris Agreement and would hugely increase Mozambique’s carbon emissions – speeding up climate and ecological breakdown.

“The Department for International Trade appears to have pushed this decision through without adequate transparency or environmental due diligence, in line with their policies and legal requirements. They have refused to disclose any meaningful information on what they have done when asked, and appear to hide from public scrutiny of the consequences of their own actions.

“In his speech at the COP26 launch, the Prime Minister described 2020 as “a defining year of action for our country, and indeed for our planet, on tackling climate change but also on protecting the natural world”. If we are going to achieve that, the UK cannot continue to fund oil and gas projects abroad.”

“The UK government has a clear obligation under its own policy to disclose how the impact of projects such as this, in which USD 1 billion will be invested in a major gas project off the coast of Mozambique, have been assessed. In the absence of such disclosure our client is unable to properly scrutinise the lawfulness of its actions.

“Friends of the Earth considers that the Government has breached its own policy and in making the investment has failed to properly consider the Paris Agreement, which requires the UK to drastically and quickly divest from fossil fuel infrastructure. Friends of the Earth believes that the investment also breaches a number of other international law standards on the environment and human rights in violation of government commitments.”