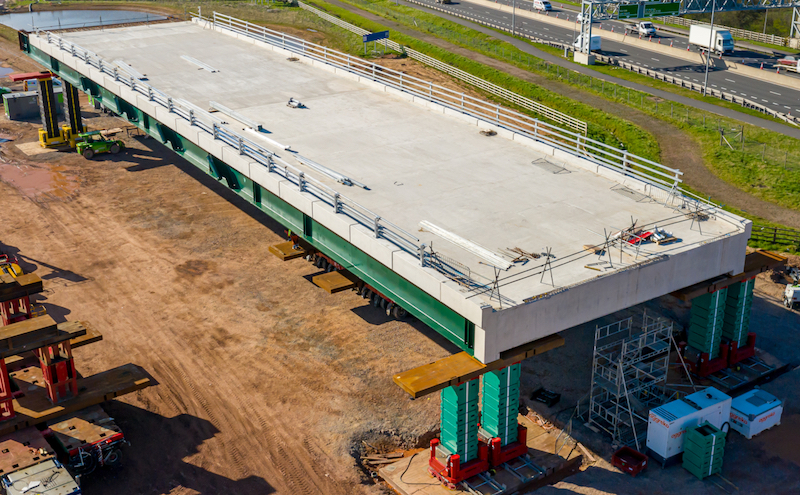 Logistics and heavy lift specialist, Osprey Group, used the Enerpac JS-250 Jack-up system to complete a bridge deck installation with one single movement. Completed before the recent UK shutdown, the 74m long x 16m wide bridge deck replaced an existing bridge over a dual carriageway. Using the JS-250 Jack-Up Systems allowed the bridge deck to be built next to the highway and transported on Self-Propelled Modular Transporters (SPMT) to the installation site. The Jack-Up units were delivered to the deck construction site by flat-bed trucks, which meant no need for specialist transport. With four JS-250 Jack-Ups at either end, the 1,400-tonne load was lifted and then transported 500m to the bridge abutments on the dual carriageway by SPMTs. Accurate positioning of the bridge deck to 6.8m at its highest inclined point with the Enerpac Jack-Ups was critical. Once in position, SPMTs were used to provide the final height positioning. The installation of the bridge was completed over a weekend.

“Enerpac JS-250 Jack-Up units are a go-to piece of equipment for us. They’re easy to deploy and operate,” said Ryan Ebanks, Project Engineer, Osprey Group. “Given the size of the bridge deck in this instance, and the need to incline it by 1.5m, the Enerpac Jack-Up was a perfect choice. Without them, we might have had to use multiple cranes.”