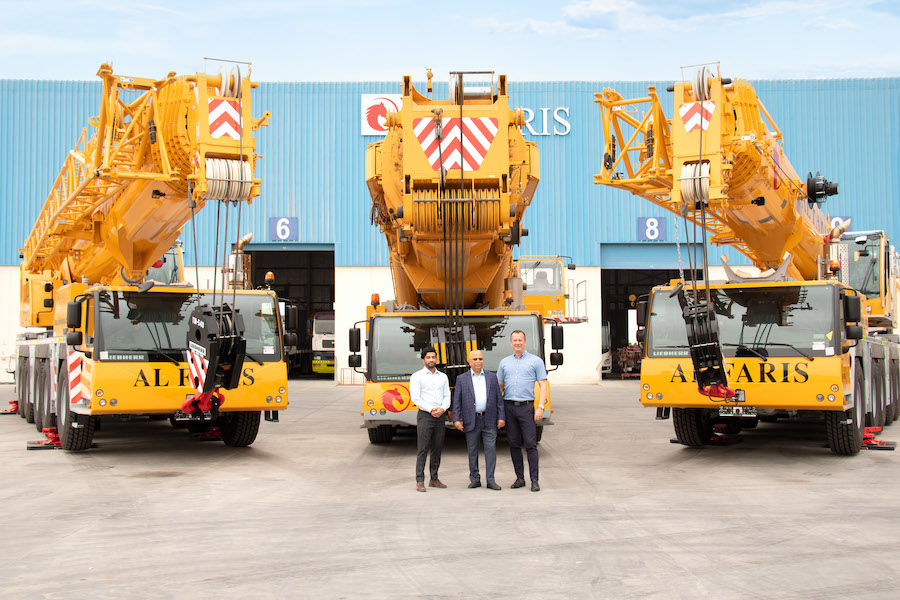 The Al Faris Group of Companies, based in Dubai, received 24 mobile cranes from Liebherr last year. The new cranes, which have a lifting capacity ranging from 110 to 700 tonnes and an additional 27 cranes already on order, are helping the Middle Eastern crane and heavy transport company to continue expanding.

The 24 cranes delivered to Al Faris include four LTM 1500-8.1s, which are the last production units of its most successful large crane. With a total of 15 machines, Al Faris now operates the world’s largest fleet of Liebherr 500-tonne cranes. “The LTM 1500-8.1 is my absolute favourite crane from Ehingen,” says Hillary Pinto, the company’s managing partner.

The package of cranes also includes its upgraded model, the LTM 1650-8.1, which boasts increased power with a maximum lifting capacity of 700 tonnes and features the latest technology such as VarioBallast and VarioBase variable supporting base. Additionally, Al Faris has received its first LTM 1300-6.3, a 300-tonne crane on six axles and one of Liebherr’s latest mobile cranes with a 90-meter telescopic boom.

At the Bauma trade fair in Munich in October, Al Faris placed an order for an additional 27 cranes from Liebherr, some of which will be delivered this year and some in the next. The new order includes six more LTM 1300-6.3s. Keonne Pinto, also an Al Faris shareholder, explains: “The concept of the LTM 1300-6.3 with its 90-metre telescopic boom combined with compact dimensions is perfect for universal operations here in the Middle East, especially in the energy sector. This type of crane is eagerly awaited in the UAE and Saudi Arabia.”