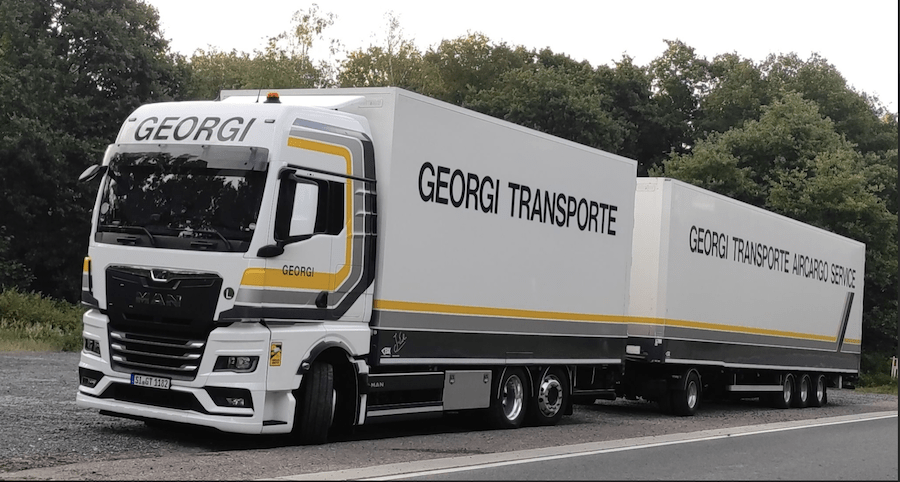 Last week, a rigid body was delivered to the German company Georgi Transporte at Van Eck Trailers in Beesd, which was sold by Joost van Eck in the autumn of 2018. Because Joost died in 2019 due to a serious accident, the delivery of the last vehicle was a special moment.

“The relationship with Van Eck goes back more than 32 years when my father bought the first air freight trailer from Hans van Eck. When I took over the company from my father in the early nineties, I continued to do business with Hans and in recent years I bought all the vehicles from Joost. Because you as families have been doing business with each other for so long, another bond is created in addition to a business relationship. That is why today was a sad day not only for the Van Eck family but also for us,” says Jürgen Georgi.

Georgi: “In 2018, we wanted to drive a number of LHVs, or as we say here, Lang LKW, between our German branches. Joost had specified the structure of the towing vehicle, but due to problems at the truck manufacturer, we got the wrong chassis. Then came corona. Before we knew it, we were two years further and now that the relaxations are a fact, we are coming to receive this box truck”.

Rene Oome, Sales Manager at Van Eck Trailers, adds: “Because we, as Van Eck Trailers, did not want to let this moment pass by, we signed Joost’s signature on this truck. In this way, we wanted to pay Joost a final tribute because of his services to the company”.

Georgi Transporte from Burbach in Sauerland has developed since the early nineties, when Jürgen Georgi took over from his father Siegfried, from a company with less than twenty trucks to a pan-European logistics service provider in air freight with more than 700 trailers and almost a thousand employees. Georgi has branches at the airports of Frankfurt, Schiphol, Liège, Hamburg, Leipzig, Stuttgart, and Prague and the company also has a branch at Breslau in Poland. In Frankfurt, the company has 20,000 square meters of space to handle air freight.

“I estimate that seventy percent of the trailer fleet has been supplied by Van Eck over the years. Van Eck is an indispensable pillar of Georgi Transporte’s success. Trailers such as Van Eck air freight trailers have no equal in the industry,” says Georgi. ” The box truck that we are now using is the last of seven pieces, which we link to an LHV. It is a typical example of the customization that Van Eck can deliver and that is of great value to our company.“