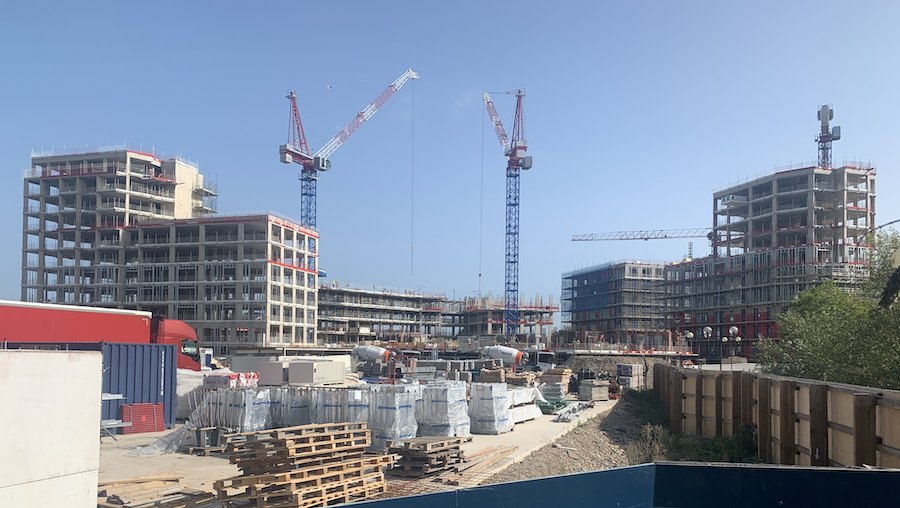 “We are proud to continue boosting our relationship with Berkeley Homes, developer of the project, by supplying these four modern Raimondi machines to the Reading jobsite. The LR213 luffing jib cranes were ideal for avoiding over-sail boundaries due the model’s 38m hook radius. The MRT159s were chosen due for ease of installation and onsite versatility,” explained Edward Saeger, Managing Director, Bennetts Cranes.

The LR213s were erected in different periods in 2020, and have not changed positions, whereas the MRT159s have been relocated to second site positioning. “The key here was having flattops with all parts preassembled, ropes passed, and rope connections installed. This was an added boon, facilitating dismantle and re-installation procedures,” he added.

Seager added that there were jobsite challenges, including supplying cranes that have a short out of service radius. This was to enable work continuation after the first blocks were completed without over-sailing the occupied flats. Secondly, ensuring that Covid-19 government regulations during operational duties were adhered to, such as maintaining a two meters distance between the installation crew members. “We not only had to carefully study the positioning of each crane through the jobsite progression, but also, with the LR213s being installed in the middle of the pandemic, we had to reinvent the erecting and dismantling methodology to comply with the safety norms in order to carry out the job.”

With one Raimondi MRT159 recently dismantled, there are currently two 14t-luffers operating onsite with heights of 40m and jib lengths of 50m, and the remaining 8tn-topless tower crane, with tower height of 36m and jib of 38m. The cranes are all expected to be dismantled in the upcoming months in line with project’s completion. The completed complex will feature 700 modern apartments, alongside a central square with amenities such as a cafe, restaurant, gym, and nursery.