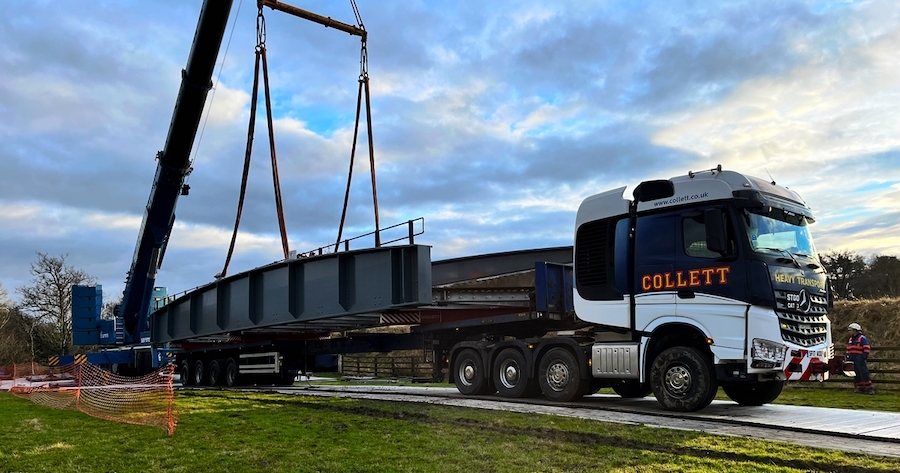 On behalf of Volkerlaser, Collett Team have completed the delivery of two bridges from their point of manufacture at Northallerton’s Allerton Steel, via BAW Coatings in Sheffield, before final destination at the Goathland construction site.  With one 50 Tonne bridge measuring 25 metres, and one 46 Tonne measuring 21 metres, Collett were required to provide transport solutions to safely deliver these lengthy cargoes.

Each of the sections were transported as smaller components from Allerton Steel’s manufacturing facility to BAW Coatings for coating and assembly.  Whilst undergoing coating, Volkerlaser were on site in Goathland dismantling and removing the current 150-year-old steel structures to prepare for the installation of the new bridges 24 and 25 to carry the railway line over the Eller Beck.

Once coating was completed, the two bridges left the facility to make the journey to the picturesque North Yorkshire Moors. Loaded to extendable rear steer flat-bed trailers, the first of the bridges, the 50 Tonne section, left Sheffield destined for Goathland.  Travelling on a Friday, and due to transport restrictions over the weekend, this bridge was first transported to Collett’s Goole Heavy Lift Facility for storage ahead of transport to final destination on the Monday.  The second 26 Tonne bridge left Sheffield the following day accompanied by Collett’s escort vehicles for delivery direct to site.

Due to the length of the cargoes, Collett Team had to perform intricate manoeuvres, first on exiting the coating facility, and again on arrival at the Goathland delivery site due to the narrow rural access. Following the removal of the old bridges 24 and 25, each of the cargoes were lifted from Collett’s trailers and installed over the Eller Beck ensuring that this section of the railway can continue to be used by passenger trains hauled by heavy steam engines.

The bridge work forms part of the North Yorkshire Moors Railway’s ‘Yorkshire’s Magnificent Journey’ project, a £10 million project to ensure future generations can enjoy the 180-year-old line. It has been made possible thanks to generous funding from The National Lottery Heritage Fund, the European Union, NYMR’s Local Enterprise Partnership and kind donations from many supporters and is expected to be complete in April 2022.