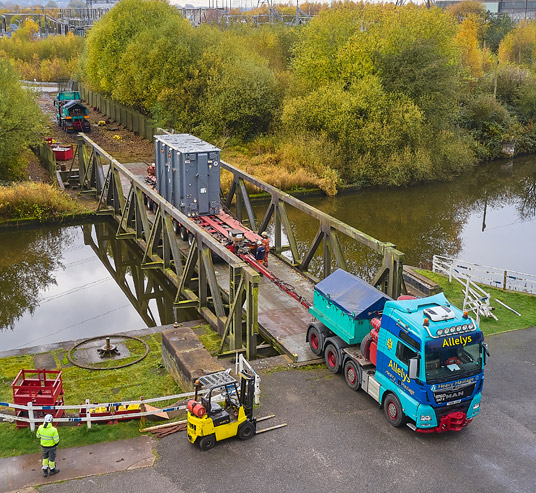 Once on site, the unit needed to be transported across a waterway and required the use of a temporary bridge. Allelys jacked up the bridge, weighing 117te, positioned rollers underneath and connected winches. The bridge was then winched across the waterway on the rollers.A 100te capacity mobile crane then lifted the nose off the bridge to allow it to be lowered down into position on the embankment, where it sat on feet that had been positioned and installed by the Allelys team.

“Being a temporary bridge, the weight capacity wouldn’t allow both the truck and trailer on the bridge at the same time,” explains Craig Mackay, Operations Manager – Projects at Allelys “Therefore we devised a solution to position a truck on each side of the bridge, to transport the reactor as far as we could and then winch it the remaining distance.”

The truck carrying the unit was configured with an extendable drawbar. The drawbar was extended to its maximum length of 10m and the truck was reversed up to the bridge until the back wheels of the truck met the bridge, positioning the reactor as far across the bridge as possible. The truck was then disconnected from the trailer. The second truck waiting on the far side of the bridge then connected winches to the trailer to winch the unit across the remaining distance of bridge and back onto land. The final stage within Allelys scope of work was to install the reactor into its final position using a jacking and skidding system.