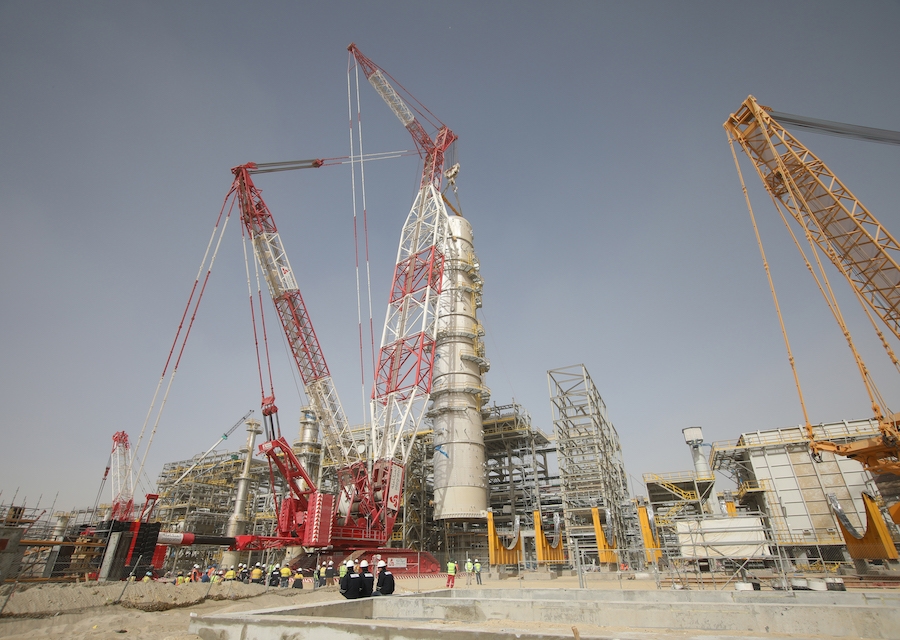 With lifting capacity of 1,600 tonnes, the CC 8800-1 from Tadano is definitely one of the most powerful lattice boom crawler crane in the fleet of the Kuwaiti crane service provider, Integrated Logistics. In combination with the optional Boom Booster kit, the lifting capacity is increased by up to 90 percent depending on the specific configuration, making the CC 8800-1 superior to any other crane in the class of up to 2,000 tonnes.

As far as Integrated Logistics Co. General Manager Manoj Kumar is concerned, there are jobs that only the CC 8800-1 can tackle: “Whenever we have to move extreme loads at a large height and a wide radius, that’s when our CC 8800-1 comes in. The reason is simple: Especially when equipped with the Boom Booster, the crane can take care of lifts that would normally require two cranes,” he explains. This was the case, for example, when lifting the 240-tonne spudcans, as well as jack-up legs that weighed up to 246 tonnes, for the Rumailah Lift Boat at the shipyard in Ras Laffan for Qatari customer N-KOM. Literally adding to the burden was the fact that the loads were anything but easily manageable: The spudcans had a diameter of 14.7 meters and a height of 7.4 meters, while the jack-up legs had a length of 40 meters and a width of 8.20 meters. But the biggest challenge was the fact that the heavy loads had to be moved at a formidable radius of 67 meters, a task that the CC 8800-1 was able to take care of without assistance thanks to the Boom Booster.

The fact that the project was carried out with a single crane in the form of the CC 8800-1 made it particularly cost-effective for N-KOM: “Being able to take care of the job with the CC 8800-1 alone enabled us to do the project much faster and much more cost-effectively than would have been the case with two cranes,” Manoj Kumar highlights.

To transport the CC 8800-1 from the ILC branch in Kuwait directly to the shipyard in Qatar, the company used a barge. Once at the shipyard, the crane was set up with a BSFL Boom Booster configuration with an 82-meter main boom and a 72-meter extension in ten days. In order to pick up the loads, the ten-person team used two 400-tonne hooks with two wire ropes and five-part reeving. This enabled the CC 8800-1 to lift all parts, move under load on the shipyard area that had been reinforced for the large weight, and finally swing the parts to the desired locations. “Thanks to our experienced team and the high reliability of the CC 8800-1, we were able to complete everything within the agreed timeframe of two months without a problem,” Manoj Kumar happily summarizes.

This also applied to another typical assignment for the CC 8800-1 with the Boom Booster kit: Lifting several reactors and distillation columns for Sinopec at the Al-Zour oil refinery in Kuwait. “To transport the crane from our headquarters to the work site, which was a distance of approximately 50 kilometers, we needed around 55 truck runs,” reports Manoj Kumar. Once at the site, the ten-person ILC team set up the crawler crane with a BSFVL configuration with an 86-meter main boom and a 12-meter extension offset by 10°. In order to be able to pick up the heavy loads safely, the CC 8800-1 was equipped with two 800-tonne hooks and 20partreeving. “We’d scheduled ten days for the entire setup process – and that was more than enough,” Manoj Kumar highlights.

The maximum load for the job weighed over 800 tonnes: More specifically, the CC 8800-1 had to lift a 65.27-meter-long, 813.4-tonne distillation column with a diameter of 8.80 meters at a radius of 20 meters, rotate, and move under load. A second crawler crane helped pick up the component until the load was suspended from the CC 8800-1’s hook in a vertical position. “In addition to the Boom Booster, the column-lifting fixture we used proved to be enormously helpful for this job,” points out Manoj Kumar, whose team was able to complete all lifts within a month as scheduled.