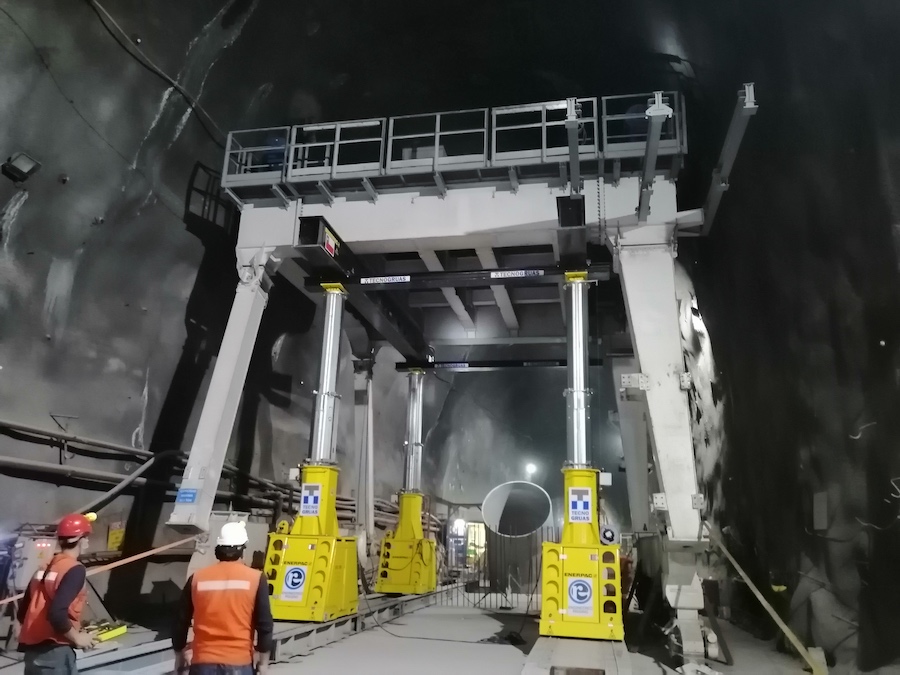 Engineered Rigging’s team contributed to the success of the largest construction project in Chile by finding the ideal rigging solution for the dismantling of a large-scale construction crane inside of a tunnel. The Alto Maipo Hydropower plant is being built in San José de Maipo, an area strategically located 50 kilometers (km) southeast of Santiago, the center of Chile’s power grid and home to 7 million people. With 44% of the country’s citizens living in Santiago, the Alto Maipo will be an important energy source for the city and surrounding areas. When completed, the facility will have a capacity of 530 megawatt (MW) and is expected to generate approximately 2,350 gigawatt hours (GWh) of electricity annually.

Construction of the run-of-the-river hydroelectric facility began in 2013 and is expected to be completed by yearend 2021. The project includes “the construction of two power plants, the Alfalfal II (264 MW) and the Las Lajas (267 MW), tunnels, four inverted siphons to cross streams, two forebays, and associated facilities, as well as 31 km of new access roads, four new bridges, and 17 km of 110/220 kilovolt (kV) power transmission lines. The total investment of the Alto Maipo project is $3 billion dollars (US).

The Vienna-based European construction group Strabac was awarded a first partial contract for the construction of 74 km of tunnels and shafts, as well as caverns, excavations, civil works, and the installation of hydro-mechanical structures. As construction of one of the tunnels of the Alfalfal II plant was nearing completion, Strabag needed to dismantle and remove an overhead construction crane that weighed 80 tons, was 8 meters high and 9 meters long.

Given the massive size of the crane and restricted space for maneuvering inside of the tunnel, Engineered Rigging was consulted for a rigging solution. Their heavy lifting experts recommended the Enerpac Super Boom Lift (SBL) SBL500 hydraulic gantry system for the project. With a retracted height of just over 3 meters, the gantry easily fit under the construction crane. At its third-stage height of more than 8.5 meters, the gantry was then able to reach the full height of the crane. With a capacity of 337 tons at its maximum height, the SBL500 safely supported the 80- ton crane while the crane’s legs were removed. The crane was then lowered and trolleyed out of the tunnel on the gantry. The gantry’s trolley capabilities allowed us to move the crane 23 meters through the tunnel to the exit. Once outside of the tunnel, the crane was safely dismantled at ground height.

Strabag projected the dismantling would take 14 days to complete. However, the powerful SBL500 gantry was quickly assembled, and the crew completed the project in just seven days.