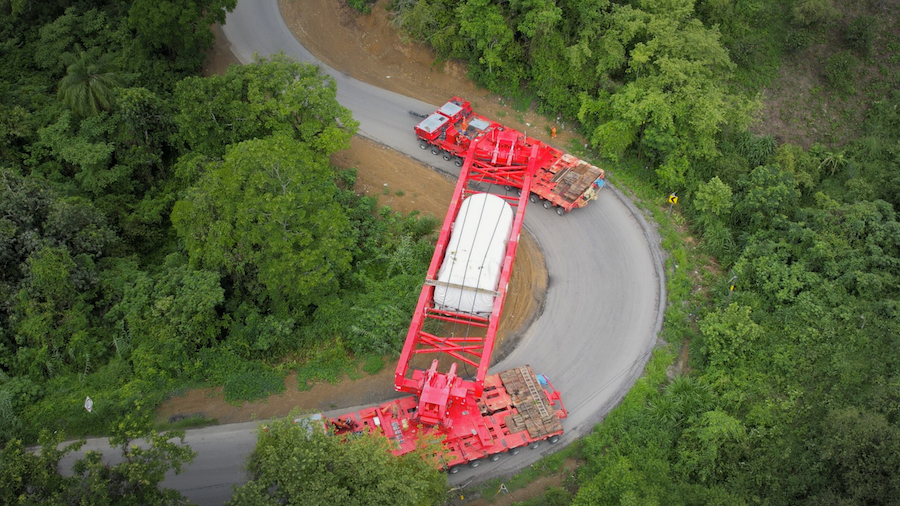 From March through May 2021, Transportes Muciño transported a gas turbine, a steam turbine, and a generator from the port of Tampico to Tamazunchale II on behalf of Mitsubishi Power Americas, Inc. Under construction in the Mexican state of San Luis Potosí, Tamazunchale II is a 514 MW gas-fired power plant, the largest in Latin America. The heaviest component was a generator weighing 380 t and measuring 10,200 x 5,430 x 5,410 mm. Since the route included multiple obstacles, conventional heavy-duty-module combinations were not feasible. With the trust of Mitsubishi Power Americas, Inc., Transportes Muciño turned to the equipment from Goldhofer to perform the job. Inclines of up to 19%, hairpin turns, and narrow roads posed a challenge for Muciño’s project engineers and in the end, multiple combinations of Goldhofer heavy-duty modules and the »FAKTOR« 5 high girder bridge were put to use. The gross weight without trucks was up to 705 t. Nevertheless, the transport could not have been performed without the Goldhofer »ADDRIVE« and the all-new »ADDRONIC«.

“With »ADDRONIC«, the basic functions such as steering, leveling, and drive of up to four »ADDRIVE« modules can be synchronized. In addition to that, the integration of an existing PST or THP fleet into the transport combination can be realized easily,” says Rainer Auerbacher, Member of the Board and Head of Transport Technology at Goldhofer.

Starting with a 2x 18-axle line »FAKTOR« 5 combination with one pushing and two towing trucks, the two »ADDRIVE« modules supported the combination. At the city of Jaltocan, the Muciño team reconfigured the convoy to a 2x 9-axle parallel combination with now four 6-axle line »ADDRIVE« modules synchronized via »ADDRONIC«. The combined traction of three tractors and the »ADDRIVE« modules were able to handle inclines of up to 14% on extremely narrow roads. With detached tractors, the convoy traversed over 46 hairpin turns, even passing a 54-degree bend in Chapulhuacanito. After another reconfiguration to a 2x 12-axle line parallel combination, the Muciño team made their way to the power plant. For the last mile to Tamazunchale II, the synchronized »ADDRIVE« modules once again played to their strengths and independently moved the convoy through a 19% decline to its final destination.

More than 126 curves were expanded in order to accommodate such a large configuration. In addition to that, six major bridge reinforcements had to be made on Panuco, Veracruz, Platon Sanchez, and several other bridges along the route. Some of the bridges even had to be crossed without trucks in order to reduce the total weight and avoid long detours. Under the leadership of Mitsubishi’s logistics team, Transportes Muciño spent over 16 months preparing for this project.