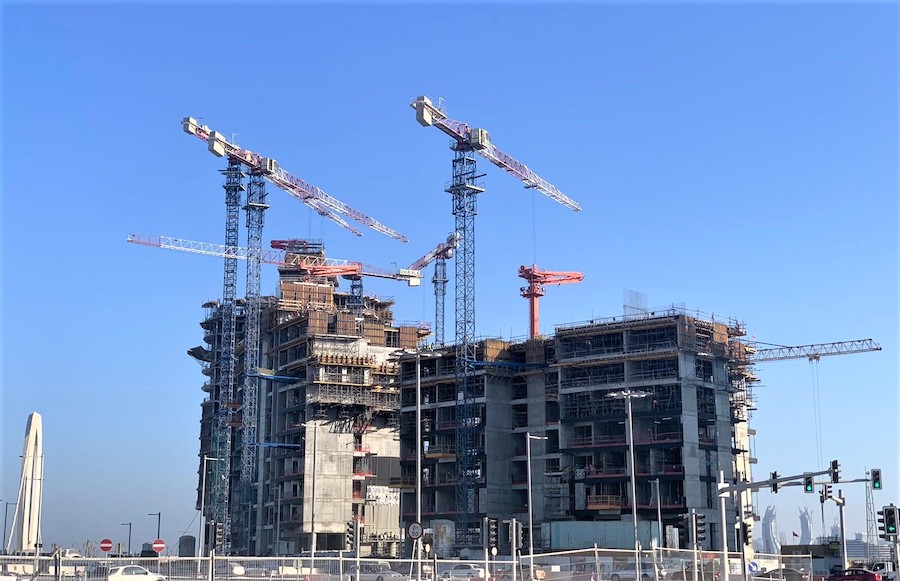 Raimondi Middle East deployed 10 topless tower cranes for the construction of one of Qatar’s most awaited residential developments: The Seef.  “Currently, we have nine Raimondi cranes operating onsite, as one MRT159 was dismantled in June,” said Wael Hasan, Commercial Director, Raimondi Middle East. “Five cranes, one MRT294, one MRT223, one MRT189, and two MRT144s, originally sold to UCC fleet, have now been resold to the contractor of this project: Urban Trading and Contracting WLL. The additional four new MRT159s were sold and installed directly by Raimondi Middle East in January 2020.”

Considering the differences of tower cranes at work, as well as the size and layout of the jobsite, one of the key aspects was a careful study of the positioning of each crane to avoid jib clashing, and to ensure the highest level of site safety and productivity. The MRT159s onsite have jibs ranging between 38m and 60m and eights under the hook (HUH) raging from 74m to 125m, while the two MRT144s positioned in different jobsite areas have 61m jib configurations and 43m HUH.

“Another significant point we took into account was the fast-tracked nature of the project as the contractor was looking to install the cranes in a short timeframe to accelerate operations. The MRT159, MRT189, and MRT223 were chosen for the models’ characteristics of arriving onsite with all parts preassembled, and embedded elements to facilitate the erection stage,” said Hasan, detailing that the Raimondi Operations department deployed four manpower groups to accelerate the process.

The Raimondi MRT294, with a jib length of 70m and a HUH of 133m, was chosen for its maximum lifting capacity of 16t, and its strong performance in a variety of climate conditions. The MRT294 is also the tallest crane currently at work on The Seef jobsite. The nine cranes will be dismantled in the upcoming months as the project’s completion is expected to be by the end of the year. Situated at the heart of Lusail City waterfront and in the proximity of several landmarks, the project is destinated to become one the most popular outdoor destinations.