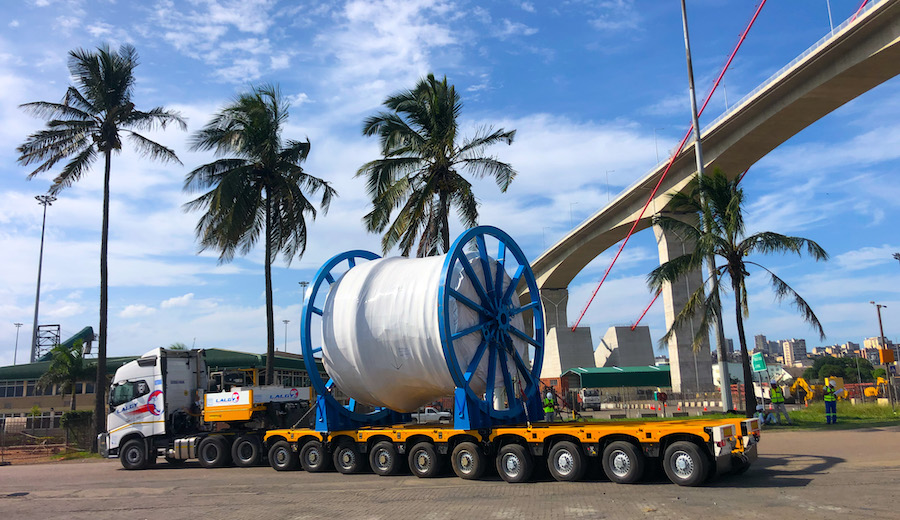 For an offshore project in the South of Africa, Fymonville’s CombiMAX modular trailer combinations took on an important function for the supply of materials weighing tons. Large components for a gas project arrived in Mozambique and were partly stored in Maputo. 12 km of chains and their steel baskets weighing up to 150 tons and more than 60 cable reels with a height of over 5 meters weighing approximately 65 tons had to be moved from the port to the storage site. For their transport, the team from Transportes Lalgy deployed a total of 18 axle lines of Faymonville CombiMAX, configured into two trailers of 8 and 10 axles with gooseneck each.

For several years, Lalgy had been operating a 7-axle CombiMAX setup, which was recently completed by another 11 axle lines with numerous accessories. Mining and construction equipment on an excavator deck, mobile cranes or industrial goods on an extra-low vessel bridge or very long cargo using the Add-on-beam, the Mozambican specialists are now in a position to build up to three different combinations at a time, thereby immensely diversifying their scope of transport solutions. General Director Aly Lalgy commented: “This acquisition opened more possibilities for our company in the field of heavy transports. The quality and reliability of the Faymonville trailers as well as the thorough training are a decisive factor for the successful execution of this and many other projects in Maputo.”

For the recent mission in Maputo, they worked together with Bolloré Transport & Logistics and their O&G project manager Michael De Abreu.  He said: “I already had the chance to benefit from Faymonville’s professionalism and support within a capital wind energy project in East Africa in the past, which included the use of numerous TeleMAX flatbed trailers. I was glad to learn from our long-standing partner Lalgy that they are using Faymonville equipment for our mooring operations in Maputo and to experience once again their support on the operations preparation. I especially want to recognize Faymonville’s support during the entire vessel operations, contributing to the successful handling of the first mooring chains in the history of Mozambique.”