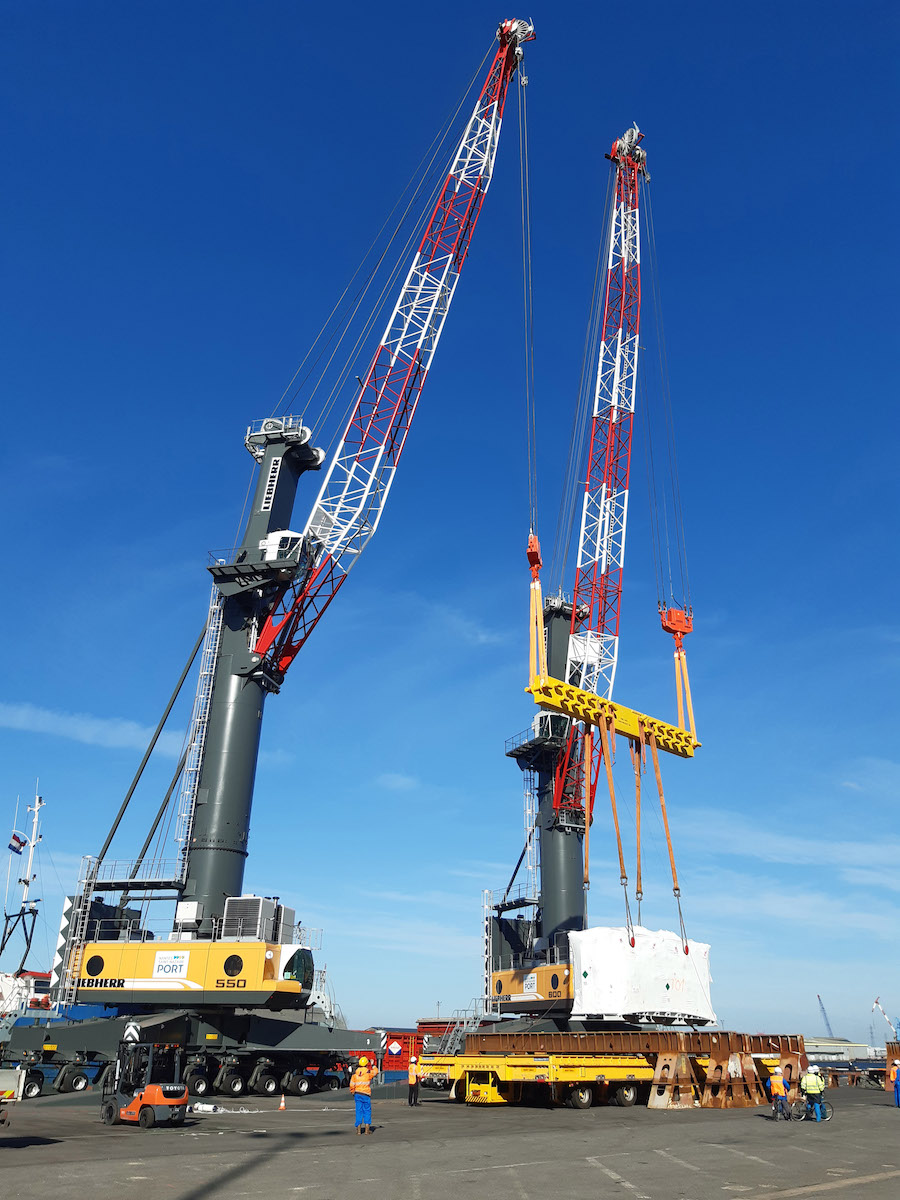 Nantes Saint-Nazaire Port has recently opted for an LHM 550 with up to 154 tonnes capacity and an LHM 600 with up to 208 tonnes maximum lifting capacity both equipped with Sycratronic tandem lifting system. According to Liebherr, the biggest benefits of Sycratronic are improved efficiency and increased safety. Due to its advanced algorithms and built-in safety systems, this system allows the crane driver to fully utilise the load curve of the cranes. Often, during tandem lifts, lifting capacity can be restricted by regulations to 75%. Sycratronic overcomes this, allowing the two cranes to be treated as one, and so can increases the usable lift capacity of each crane by 25%. The Sycratronic system monitors possible shifts of the center of gravity of the load and automatically corrects to ensure the best stability. The biggest advantage however, is the elimination of human communication errors between two crane operators, which can result in accidents, especially during tandem lift operations.

Using a Controller Area Network (CAN bus), the Sycratronic system connects two cranes and enables their central processing units (CPU) to communicate with each other. This allows the leading machine to provide input like the slewing angle, hoisting height and the weight on the hook to the following machine. This means that the following crane does not just simply follow its leader. Movements are automatically calculated and implemented. This makes it possible for one crane driver to operate both cranes simultaneously.

The two new cranes will handle offshore wind turbines parts and assemble them for the offshore wind farm “Parc du Banc de Guérande”. The new windfarm from General Electrics is located 12 km off the Loire-Atlantique coast and is scheduled to become operational in 2022. The windfarm consists of 80 offshore wind turbines with 6 mega watts per unit and total of 480 mega volts. Wind turbine parts, rotor blades with a length of 75 metres, generators, and monopiles will be assembled and stored in Saint-Nazaire before shipment to Parc du Banc de Guérande in 2022.