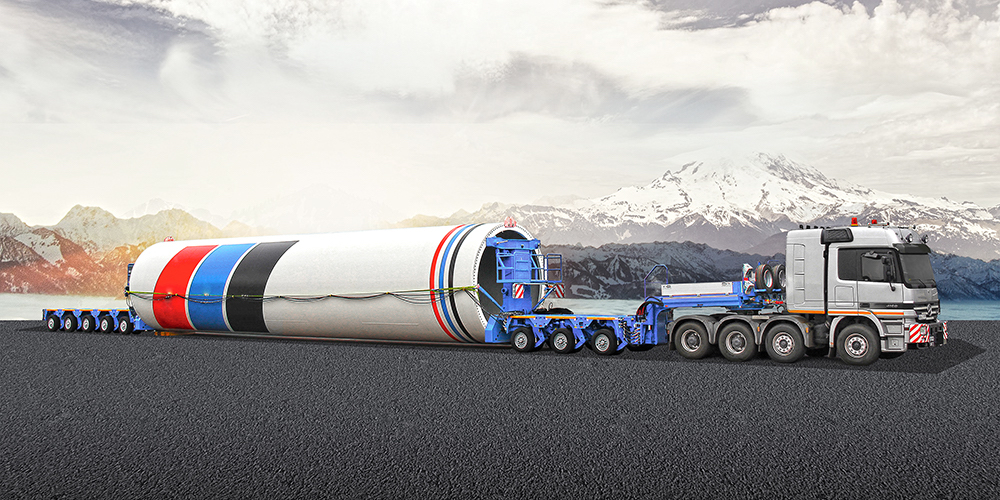 The modular platform vehicles of the UltralightCombi U10/U11/U12 series from Scheuerle have been in particular weight-optimised and score highly with a favourable payload-to-dead weight ratio. In the course of developing the product range even more, Scheuerle design engineers further optimised and lowered the operating costs of the vehicles. The increased bending moment makes it possible to drive more axle lines. Up to now, the combination of a front bogie unit with four pendulum axles, one deck bridge and one rear bogie with six axles has been possible (combination description: 4+6), i.e. the most powerful version of the UltralightCombi. Now it is possible to realise a combination of 5+7 axle lines. This facilitates an even greater payload for the vehicle operator through the use of two additional axle lines.

With a permissible axle load of up to 13.4 tonnes at 25 km/h – 80 km/h, the U11 version allows particularly high payloads to be transported. Away from public roads, for example, during internal logistic operations, axle loads of 14.8 tonnes at a maximum of 25 km/h and 17.4 tonnes at 10 km/h are possible. With a total width of 2.55 metres, the platform vehicles of the U10 and U12 series fully comply with EC standards and Road Traffic Licensing Regulations (StVZO). This offers advantages regarding approval procedures and especially for empty runs. In addition, it is possible to use ferries or other width-critical facilities or routes with these combinations. The UltralightCombi has an identical span as other Scheuerle vehicles with 3m widths.

TII design engineers also attached great importance to reducing the number of component variants as well as using components from the other Combi series vehicles. For example, the new UltralightCombi platform trailer is equipped with the pendulum axles of the EuroCompact models along with the steering of the InterCombi vehicles. The gooseneck is now largely identical to that of the EuroCompact low-bed semi-trailer. As a result, this means that the continuous fifth-wheel load adjustment of the EuroCompact vehicles is also available for the UltralightCombi series.

Furthermore, the new versions are compatible with the previous models. In addition, the UltralightCombi U10 and U11 versions can still be combined with modules of the InterCombi and EuroCombi series. According to the manufacturer, another advantage of the UltralightCombi series is the easy handling. For example, when using a deck with a hook coupling adapter, the front bogie unit can be removed for loading operations so that self-propelled machines can drive onto the low-deck trailer at the front by means of a flat ramp. Vehicles in the UltralightCombi series can be used for a wide range of tasks. Due to the axle line loads and the EC-compliant vehicle width, the modular platform trailers are suitable for the transport of large and heavy loads on public roads. Thanks to their low dead weight, they facilitate compact combinations with the same payload compared to the modules of the Combi series. Construction machinery, components for wind turbines, containers, transformers and crawler crane components are typical loads.

The UltralightCombi modular platform vehicles are available in 2, 3, 4 and 6-axle versions. The modular design of the UltralightCombi vehicles facilitates use as a trailer and semi-trailer as well as a bolster or low-deck combination. A comprehensive range of practical equipment options is available. This includes excavator, slab and frame decks as well as wind tower adapters.