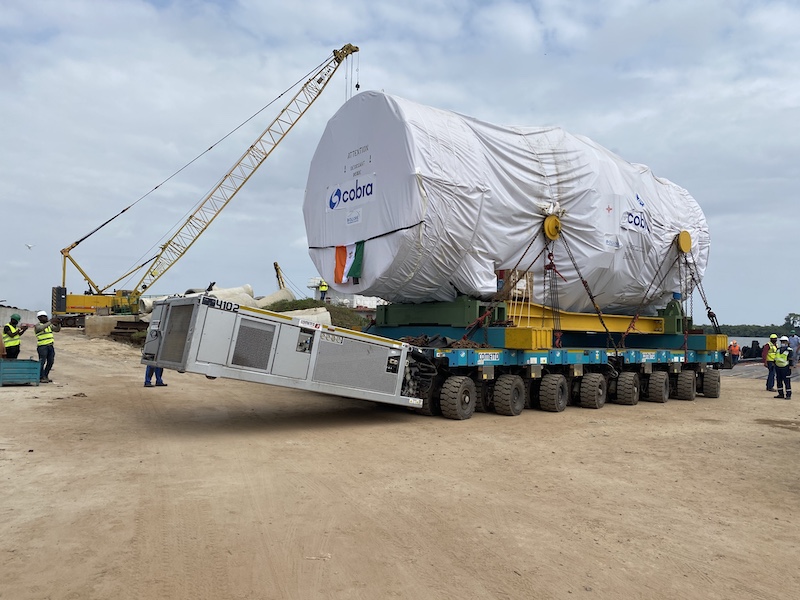 Bolloré Transport & Logistics has transported 900 tons of equipment for the construction of phase 4 of the Azito power plant in Ivory Coast. Including among others a turbine and a generator, that were moved by Marine Maroc on their Cometto SPMT as 8+8 axles side-by-side configuration.

After a long travel, the heavyweight elements arrived by ship and specialists from Bolloré and Marine Maroc received them for unloading. Firstly, the turbine weighing 361 tons took its turn. A SPMT convoy formed by eight axle lines, coupled side-by-side with other eight axle vehicles, has been used to solve this mission. The modular combination generated a platform width of five meters and a payload capacity of about 600 tons. The self-propelled modular transport controlled by a wireless remote control was steered under the freight which was packed in protective plastic.

Thanks to the 600 mm stroke, the vehicle picked up the turbine from the steel frame and started it final movement to the power plant. The electronic steering of the light blue painted modules guaranteed maneuverability and precision through a +135 / -135 ° steering angle. After this successful move, the self-propelled unit also loaded the 295 tons generator and made the same route a second time.

Marine Maroc is based in Casablanca and  the Cometto MSPE vehicles have been a part of its fleet since 2013. Cometto offers four interchangeable series of SPMT having capacities up to 70t per axle line for the EVO3 category. Each series is available in two different basic widths of 2,430 and 3,000 mm. The modules can be composed of 3, 4, 5 or 6 axle lines. Many types of Power Pack Units are available in various strengths, each depending on the number of axles being driven.