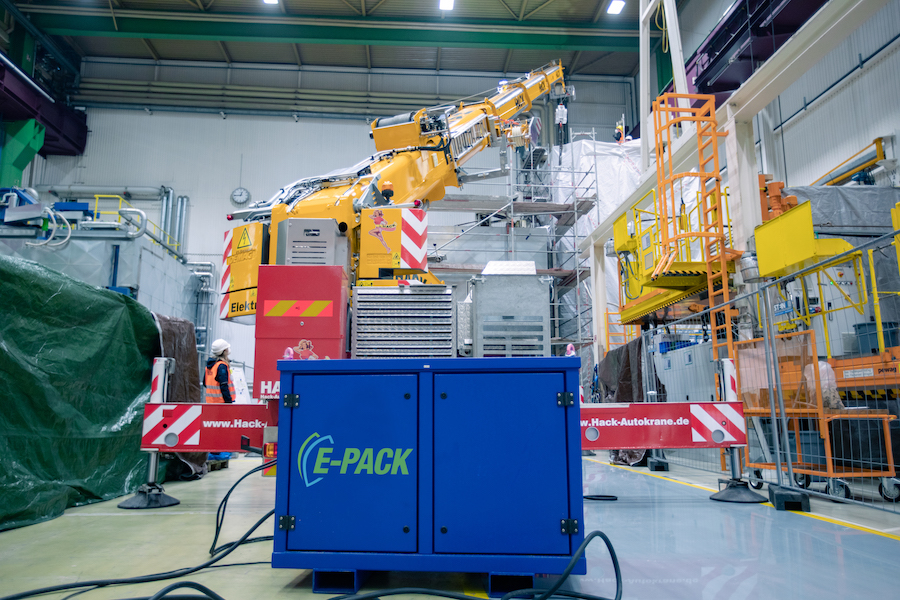 Neuwied-based heavy transport company Hack Schwerlastservice has relied on Tadano’s AC 3.045-1 City with the E-Pack to shift heavy equipment at Hitachi Energy Germany AG’s plant in Bad Honnef. “Without the E-Pack for the AC 3.045-1 City we wouldn’t have had a hope of getting this job done,” said Udo Hack, managing director of Hack Schwerlastservice.

On arrival at the plant location, the Hack team transported the E-Pack directly into the hall using an electric lift truck. Moving the AC 3.045 City-1 into position in the cleanroom hall was somewhat more complicated, as the most direct route was too tight, so the crane had to make a detour through the adjoining hall. The gates to the hall were barely three-meters wide, and inside there was very little room to maneuver, but neither of these constraints was a problem for the Tadano City crane with its ultra-compact design.

On-site setup was very quick, with the entire process from start to finish, including connection of the E-Pack, taking just 30 minutes. “The customer originally wanted us to fit the AC 3.045-1 City with a runner, but in the end the compact overall height of the hook block meant we didn’t need to,” says Udo Hack. The crane had to be set up in a corner of the hall, the tight space constraints meant there were no other options, it had to telescope in and out for every lift. “As a result, some of the components we had to lift, pipes and concrete parts weighing up to 12 tonnes, exceeded the crane’s lifting capacity,” said Herbert Schellberg, a project manager at Hack. To remedy this, some of the components had to be dismantled prior to lifting so as to reduce their weight.

“With their Tadano crane and its absolutely ingenious E-Pack, the Hack team did a fantastic job. We were most impressed that they could operate a crane electrically and hence without emissions and still get such great performance out of it,” said Frank Urfey, the industrial engineering manager at Hitachi Energy Germany.