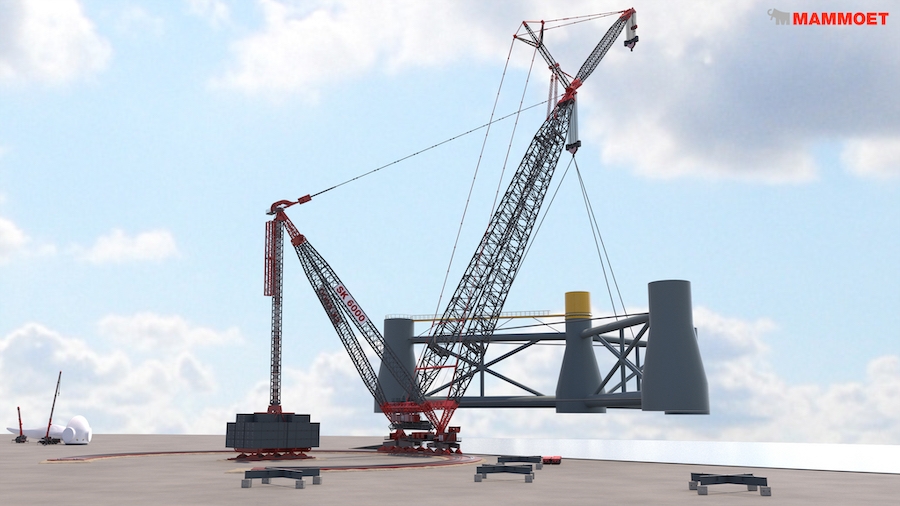 Mammoet has introduced a fix jib configuration for the SK6,000 that will allow offshore wind developers to reach deeper waters and significantly cut the cost of floating wind assembly.

Fixed bottom turbines and their foundations are growing fast, so that projects can be built further from the coast where winds are stronger and greater yields can be achieved. As a result, jackets and monopiles are reaching both the height and weight capacity of the world’s largest cranes.

As the industry moves towards 20MW turbines, floating wind components continue to grow in size and weight. This increases the need for a modular approach, to speed up the construction process and allow developers to install more floating turbines in reduced weather windows.

With the launch of the SK6,000, Mammoet is providing the next generation crane needed to install next generation turbines. Now, with its existing, patented, fixed jib configuration, lifts of 3,000 tonnes at 220m height become a reality.

Moreover, this new configuration means that the crane can load out floating foundations using its main boom, then immediately use its fixed jib to assemble the turbine tower. No reconfiguration will be necessary between scopes, further improving build efficiency.

Mammoet technical expert Jeremy Haylock explains: “We don’t look at the SK as ‘just’ a crane, but we look at it as a system as well. If you look at the SK of today compared to when it was first launched, it has evolved considerably.

This isn’t a surprise because it was always the basis of our original design philosophy, and we wanted to develop a product that would be scalable and agile. Because the world is developing so quickly, and the changes around us are so vast, our aim was to deliver a product that would allow us to grow in real time with our customers”.

The SK6,000 fixed jib is just the latest evolution in a crane series that allows small adjustments to have a large affect on performance, avoiding the need to research, develop and fabricate an entirely new crane.

Haylock continues: “As with every part of the SK, when we developed the fixed jib, we wanted to include room for growth. With the SK6,000 jib we are employing that additional capacity through small adjustments to the original design.

The fixed jib is fully forward and backward compatible through the SK series, meaning our customers can realize its potential, regardless of the application.”

The new jib design will be incorporated into future Mammoet offshore wind project proposals, for deployment to a suitable project at the first possible opportunity.