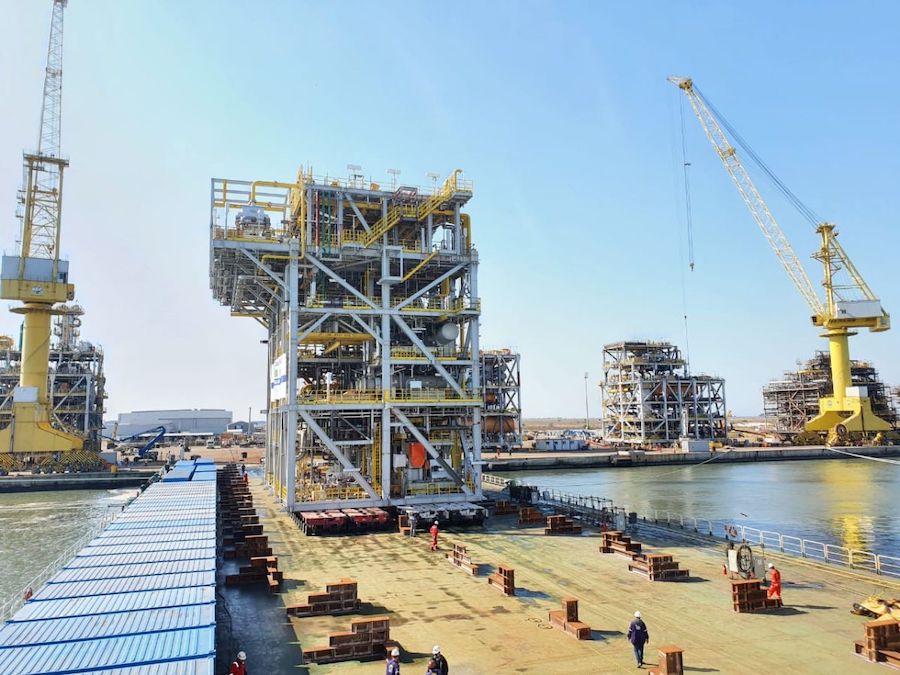 Offshore construction specialist Estaleiros do Brasil Ltda. (EBR) needed the load-out of seven modules to be engineered, planned, and executed in the space of just a few weeks. These modules were being built in Brazil destined for FPSO integrations abroad. The modules – some weighing up to 2,200t each and over 30m by 18m in size – were to be transferred from the quay to a waiting ship. Phase one of the project would transfer the first four such modules, and phase two the remaining three.

A challenge presented itself during the first phase, as there were limited feasible jacking points available underneath the module. These are strengthened areas, built into a module’s design, that allow it to be lifted from underneath by large jacking systems. As there was not sufficient time to reinforce the structure of each module so that they could be jacked down using other points, an alternative solution had to be found. It came through innovative use of standard lifting equipment.

Hydraulic trailers used for transport projects have the ability to raise and lower mechanically, so it was decided that each module would be lowered sequentially, using the hydraulic course of the trailers rather than traditional jacking equipment. In turn, each module was weighed, jacked-down to the correct grillage height, then loaded-out onto the ship within a precise timeframe. This methodology allowed the first four modules to be loaded-out in just twelve days instead of the allotted 15.

Phase two of the operation, which included the three final modules, was completed  few months later. During this phase, only the weighing and load-out was required. To complete this scope, Mammoet’s team mobilized the same 96 axle-lines of PST/THP trailers as previously used, a large selection of weighing and auxiliary equipment. During phase two, the largest module measured over 29.9m (around 98,000 ft) long and 37.488m (122.9 ft) tall. Again, each module’s weight aligned with expectations, at around 2,200t each.

Mammoet Project Manager, Alvaro Campos, explains, “One of Mammoet’s greatest challenges was the mobilization time since we were asked to deliver with very short notice and the required equipment was in various locations across Brazil. We managed to get everything to site on time thanks to the hard work of a very professional crew and we pulled out a safe execution which was praised many times by our final clients and brought them much relief.”

Both phases were effectively delivered for end customers Modec and Cameron/SBM respectively.