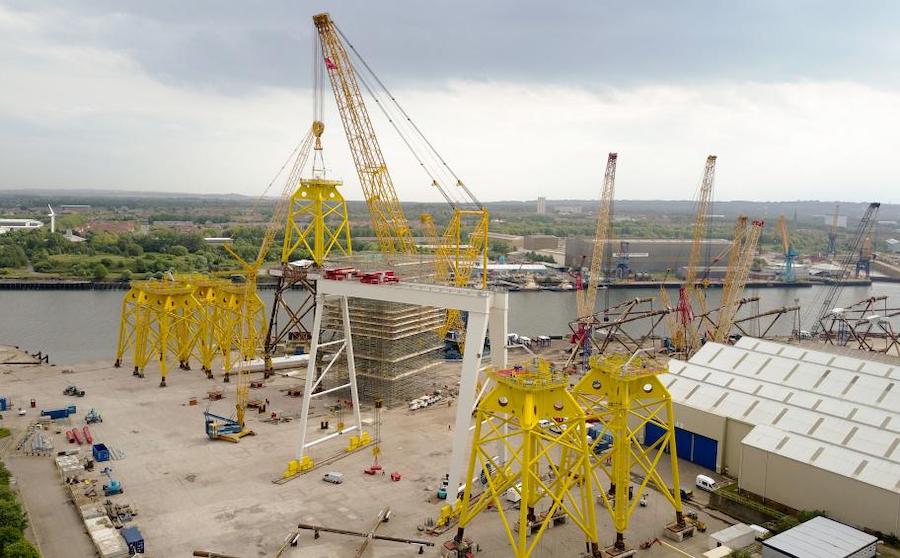 Eiffage consortium has been awarded two new contracts to manufacture the foundations and electrical substations for two wind farms off the British coast. Alongside the Dutch company Sif, Smulders won the contract to manufacture and supply 87 foundations, each comprising a monopile and transition piece, for the third and final phase (C) of the Dogger Bank project. The same consortium had previously been awarded the contract for the 190 foundations in the first two phases (A and B) of the project in November 2020.

For these two contracts, Smulders will manufacture the secondary steel and assemble, coat and test the fully equipped transition pieces. Manufacture of the Dogger Bank A parts has already started at the Smulders’ yards in Poland and Belgium, with assembly on the firm’s site in Hoboken, Belgium, set to take around ten months.

A joint venture between SSE Renewables, Equinor and Eni, Dogger Bank Wind Farm will be located in the North Sea off England’s Yorkshire coast. With a capacity of 3.6 GW, on its completion in 2026, it will be the largest offshore wind farm in the world, powering more than 6 million homes in the United Kingdom. This will be the first British offshore project to use the high voltage direct current (HVDC) transmission system.

Smulders also secured the contract with Siemens Energy to manufacture the Moray West offshore wind farm’s two electrical substations, using Siemens Energy’s Offshore Transformer Module technology. The substations will aggregate and transform the energy from up to 85 wind turbines. Smulders will handle engineering and construction of the steel structures. Works will begin in its Belgian factories in April 2022, for subsequent assembly at its site in Newcastle, UK, which was previously dedicated to manufacturing jacket foundations, including the 55 produced for the Moray East contract awarded in 2019.

Developed by Ocean Winds, and with a minor shareholding by Ignitis Group, Moray West is located off the north east coast of Scotland. With a capacity of 860 MW, when commissioned in 2024, this wind farm will power up to 640,000 UK homes.