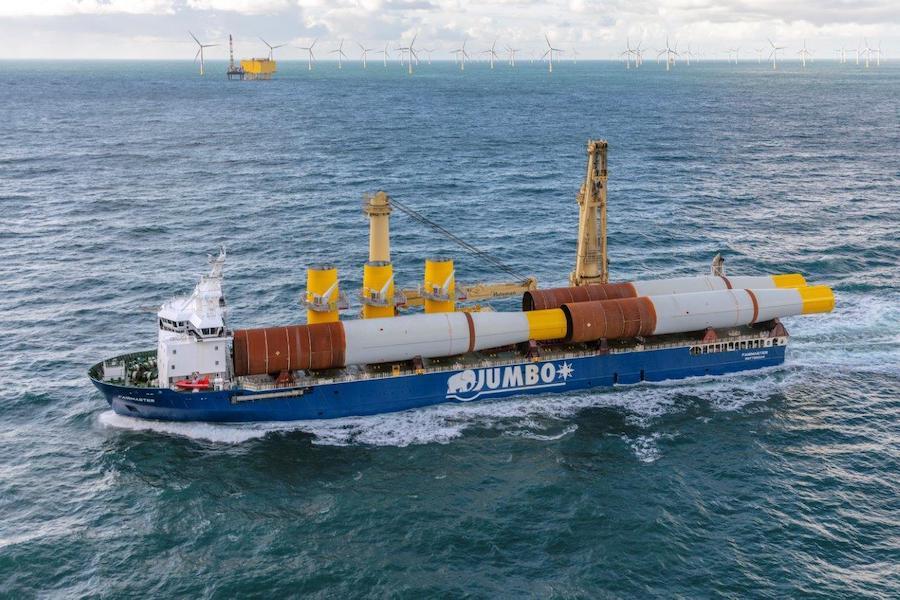 “This engineered flexible solution made it an extremely efficient vessel for the project and is one of the things we’re most proud of – it helped us conclude the project scope within just 37 voyages in a period of just under twelve months,” says Jumbo’s project manager Maarten De Gruyter.

Furthermore, the multiple loading configurations of the Fairmaster allowed Jumbo to adjust to its client’s planning, which was linked to the delivery sequence from fabrication yards. De Gruyter: “We had close cooperation with DEME Offshore with regards to scheduling, and we could handle many changes to the sailing sequence. Ultimately, this meant that we could carry more equipment within less time.”

The MPs in particular were 8.5 to 9.5 metres in diameter and weighed up to 1,285 tonnes. Because of the repetitive nature of the job, the company paid special attention to maintaining a clear focus on safety throughout the project. Jumbo treated every lift as a heavy lift with a high focus on bringing these major cargoes safely on board. To this end, Jumbo brought in an external safety consultant to investigate and prevent complacency on board.

The efficiency of execution was due to numerous aspects. “During the planning phase, we designed and engineered the MP saddles and TP grillages to deliver our proposed vessel efficiency. We used inlays in the saddles to accommodate the different diameters of the MPs. The clearances were tight: sometimes 50cm or less between components,” says De Gruyter. “We also installed project-specific lifting lugs on the deck hatches to speed up loading and unloading operations. This is an example of one of our value engineering proposals – smart ideas that we present to our clients to optimise operations.”

As part of reducing the environmental footprint of the construction of the Hornsea Two offshore wind farm, Jumbo was required to include a Green Initiative into its project execution. Jumbo’s chosen solution was to sail with Bio-Fuel Oil from sustainable marine biofuel provider GoodFuels. This product is expected to deliver 80-90% CO2 reduction versus fossil equivalents and contains no sulphur oxide (SOx) emissions.

For Jumbo, the Hornsea Two project is notable because it was the largest number of MPs and TPs that it has ever shipped in a single contract and also with a single heavy lift vessel. “We converted the Fairmaster into a kind of ‘Swiss Army knife’ that provided an unrivalled heavy lift vessel intake of large diameter monopiles and transition pieces, but still with the flexibility required for the various lengths and diameters that were to be transported,” says Jumbo’s commercial manager Boudewijn van der Garden. “From tender to project conclusion, Jumbo’s focus was to provide a total solution. Our office personnel, engineering teams and vessel crews are now ready for the next challenge.”