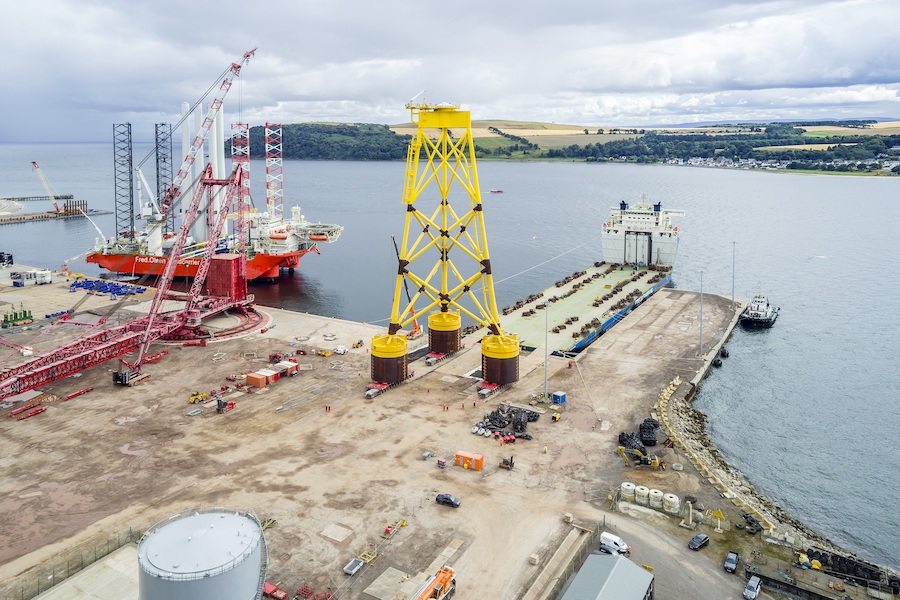 The Engineered Heavy Lifting and Transport specialist Mammoet now also uses Cometto MSPE as new type and brand in their worldwide self-propelled modular trailer fleet. A first mission is being carried out in the United Kingdom with 84 axle lines for moving jacket structures weighing between 1,850 and 2,300 tons.

The new collaboration between Cometto and Mammoet leads to a combination of two partners that stand for competence in special and heavy haulage business. “We are really proud to supply the worldwide heavy hauling and lifting reference with our self-propelled vehicles”, explains Cometto Sales Manager Joachim Kolb. After a detailed training session on their new SPMT, the Mammoet operators execute the first mission while transporting a tripod foundation in the United Kingdom. The bulky item has a height of 90 meters and weighs 2,035 tons.

The Mammoet crew transports the load on 84 axle lines Cometto MSPE with a payload capacity of 48 tons per axle line and three Power Pack Units with an output of 368 kW each. The self-propelled combination comes in an open compound with three MSPE trains. 28 axle lines in a side-by-side combination are positioned under each leg of the tripod.

The tripod foundation is part of an offshore wind project that is called Seagreen OWF, a joint venture between TotalEnergies and SSE Renewables. The windfarm will exist of 140 turbines and is located 27 kilometres off the coast of Angus in the North Sea firth. In the future, the project will feed Scotland with power from this impressive wind farm.

The duration of the project for heavy lift specialist Mammoet will be at least twelve months.