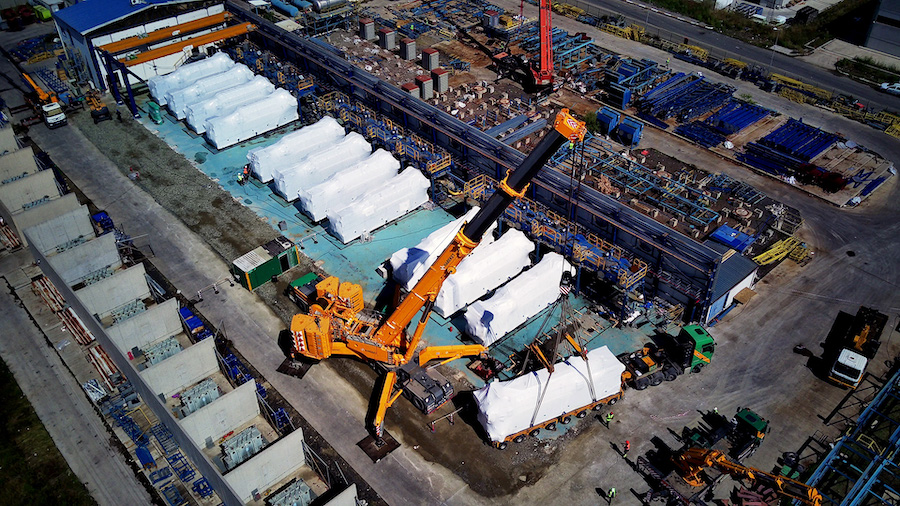 Hareket has undertaken the dismantling, crane and transportation services of two power plants in Uzbekistan that will generate 510 MW of energy per year. The Turkish Heavy Lifting and Project Transportation specialist delivered all the equipment of the 240 MW Natural Gas Combined Cycle Power Plant, the heaviest of which is 172 tons, to its location in the Kibray region in Tashkent, Uzbekistan, which is approximately 4 thousand km away, in a very short time of three months. The parts were loaded on the canal ship from Samsun Port and discharged at the Bautino Heavy Cargo Terminal, where Hareket serves in the Caspian Sea via the Black Sea and Don-Volga Canal. Then, it was transported to the Tashkent Kibray region with 144 axle hydraulic vehicles suitable for road conditions and mounted in place with the gantry lifting system. Other components of the plant were transported to the region via land with 275 lowbed and standard vehicles from Turkey.

Hareket is now carrying out the project of moving the 270 MW Natural Gas Combined Cycle Power Plant located in İzmir Aliağa to Bukhara, Uzbekistan, which is 3500 km away. The ongoing project is expected to be completed within three months. 30 pieces of equipment belonging to the power plant, whose weights vary between 116-180 tons, are taken from the factory in İzmir and first discharged to Aliağa Port with hydraulic trailers, then loaded from the port and discharged via the Black Sea and Don-Volga Channels at the Bautino Heavy Cargo Terminal, which is serving in the Caspian Sea. The parts whose weights vary between 20-50 tons are delivered to Bukhara by 560 tautliner & lowbed vehicles. In addition to these, a freight of 3 pieces of 125 tons transformer and 23 pieces of truck trailer was carried out within Turkey specifically for the project.

Noting that Turkey has taken very important steps in energy exports in recent years, Abdullah Altunkum, Board Member of Hareket, said: “Natural gas combined cycle power plants, which have not been operating in our country in recent years, but are in operation, are in demand especially from the Turkic Republics. The export of these power plants belonging to Turkish companies makes a very serious contribution to the country’s economy. However, moving a power plant to another country is a very difficult process. As Hareket, we play an important role in power plant exports by successfully performing dismantling, crane and transportation services with our expert staff and powerful equipment.”