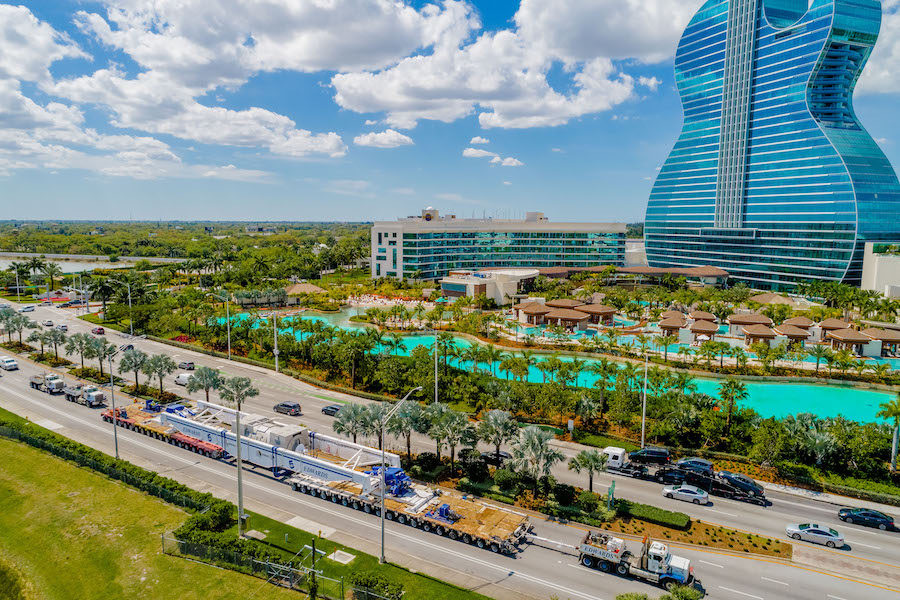 Edwards Moving & Rigging was awarded the contract to transport two turbines and generators weighing 317t – 430t (698,865lbs – 947,988lbs) in Fort Lauderdale to a power plant approximately 19km (12 miles) away. This involved picking up the cargo from a barge and transporting it over regular highways to the power plant.

The big challenge with this transport was the part on the highways where height restrictions of 5.5m (18 ft) had to be considered, so that the cargo couldn’t be loaded directly on the platform of the modules.

Edwards has relied on its Goldhofer »FAKTOR« 5 high girder bridge and its large pool of Goldhofer heavy-duty modules. “With this equipment and our highly experienced team, handling this transport was almost a routine job for us,” says Tobias Epple, Director Business Development Europe at Edwards.

The use of the »FAKTOR« 5 made it possible to hang up the transformers and the generators between the module combinations in the front and in the rear so that they could pass under the bridges without any problems. With a vertical stroke of 1.8m (5.9ft), the transport team was also able to clear any roadside obstacles on the route.