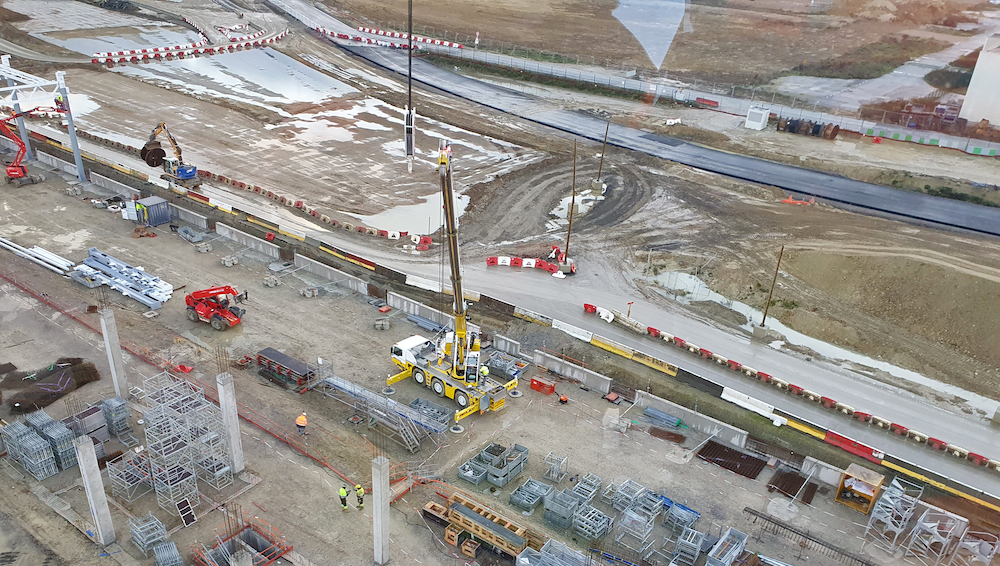 The AMCS technologies teams commissioned the anti-collision system between a Demag AC55-3 mobile crane and one of the four Wolff 7534.16 tower cranes on the site dedicated to the construction of the operations center for lines 16 and 17 of the Grand Paris Express in Aulnay-sous-Bois, France. For several weeks this mobile crane worked within the range of action of one of the tower cranes. In interference, the two machines must respectively meet deadlines and therefore be productive as the construction project of the 11 buildings must be delivered by 2024. In a few days, the activation of the interference with the three other tower cranes (including one in tranvelling) will be effective. This mobile machine is expected to work on the site until next April. A second mobile crane, Liebherr LTM 1100, has joined the site and will also interfere with all Wolff tower cranes.

The DCS 61-S automatically detects the movements of the mobile machine and integrates the control of tower cranes. The systems placed on tower and mobile cranes are connected via a radio network and constantly exchange all sensor information. Due to mobile antennas, every DCS 61-S connected in the anti-collision network knows the positions of the mobile crane’s elements at any moment. The screen installed in the crane operator’s cabin provides him with all the information useful for operating the machine in real time. The crane operators of the tower cranes are directly alerted when a mobile crane arrives and enters its working area. When the mobile cranes move and reposition themselves in a different area to work, the tower crane devices automatically detect their movement and positions.

The device calculates in real time and in 3D the distances between each element of the cranes (including the position of the cabin) as well as the movement speeds. This is to intervene on the cranes control mechanism to ensure a slowing down, followed by a complete immobilization of the tower crane at a pre-set distance from the mobile crane. For the mobile crane, the device emits an increasingly loud audible signal when approaching an interfering tower crane or a prohibited overflight area.