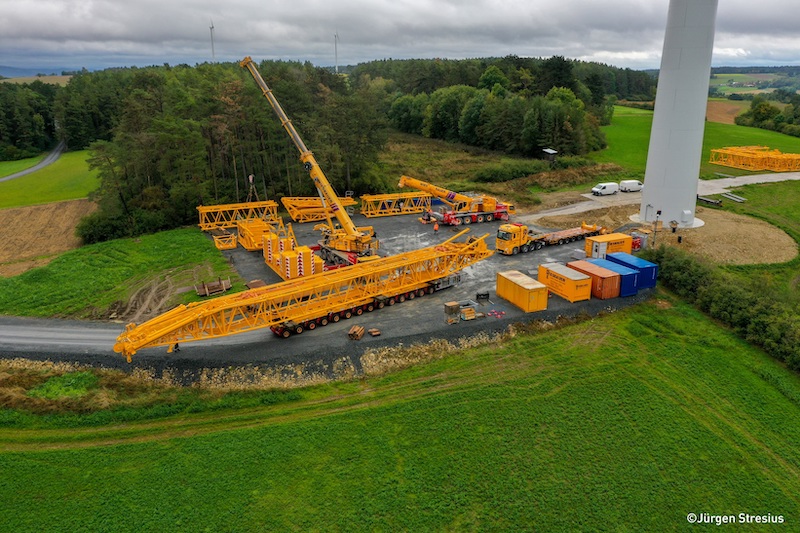 Cometto MSPE self-propelled vehicles were used to relocate the Liebherr LR11000 crawler crane within the Rugendorf wind farm. A total of four wind turbines make up a wind farm of the latest generation in Upper Franconia. In the handling of this project, the crawler crane was disassembled after the erection of a wind turbine and assembled again at the next location. For this task, the German crane service provider Wiesbauer used its Cometto MSPE self-propelled vehicles in a 14-axle combination, onto which the 42 metre-long derrick mast with a dead weight of 60 tonnes was loaded.

“The time saving that we achieved was the reason we chose this means of transport,” says the company’s director Jochen Wiesbauer about this important stage. It was the faster solution compared to other transport options and the relocation of the crane was thus accelerated. The combination proceeded at walking speed and formed a big yellow spot in the green landscape. “The Cometto vehicles impress with their flexibility and manoeuvrability,” added Jochen Wiesbauer.

A total of 20 Cometto MSPE axle lines with an axle load of 48 tonnes and two power pack units with an output of 202 kW each belong to the permanent vehicle fleet of Wiesbauer and are regularly used for a wide variety of jobs.