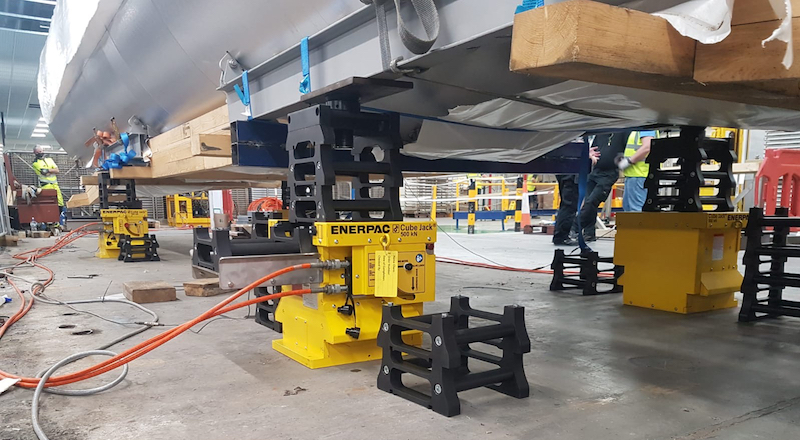 PHL Hydraulics UK has relied on Enerpac SCJ-50 Cube Jacks to install a 40-ton processing vessel in a busy chemical plant. Measuring 80m x 4m diameter, the vessel needed to be raised 1.5m to allow a 1m high platform to be inserted beneath. Supplied with jacking beams, the vessel was initially raised from 0.25m using jack and pack taking 4 hours. At 0.5m, four cube jacks were inserted at each corner.

“As the plant was fully operational then using a forklift truck to move cribbing back and forth was impractical. Deploying the Enerpac cube jack meant we only needed the minimum of cribbing to get the vessel to the point where we could switch to the cube jacks,” said Damien Lynch, sales director, PHL Hydraulics UK.

Over the next two hours, the cube jacks raised the vessel to 1.5m and lowered it onto the platform. Precision was critical. The cube jacks achieved accuracy within 2mm during lowering allowing correct alignment of the vessel.

Damien Lynch again, “The Enerpac Cube Jack was fast and really came into its own when lowering. It gave us the control we needed to precisely align the vessel on the platform. Once installed we quickly lowered the cube jacks and the job was complete.”