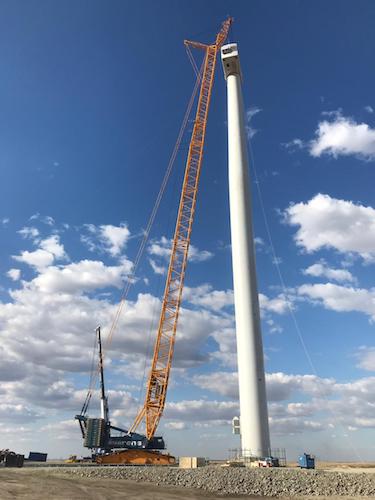 On behalf of customer GE and project owner ENI, Sarens has recently unloaded several wind turbines parts and has installed thirteen turbines at a project site in Badamsha, Kazakhstan.The Sarens crew needed to unload and install all of the turbine parts in the same location. To do this, they worked in two teams, one unloaded turbine parts using the AC 500-2 and the ATF 130 cranes, and the other erected them using the LR 1600-2 and LTM 1160 cranes.

Sarens used the Demag AC 500T and Tadano ATF 130G cranes to unload the turbine parts. This combination of cranes was chosen because a single crane could lift the heaviest wind turbine part, the nacelle, which weighed 96 tonnes, while two cranes working together could lift other parts which were not as heavy but were long. It was important for the crew to unload all parts accurately and within the lifting range of the LR 1600-2, which would later perform the final erection. It was also necessary to allow enough space for assembling and dismantling the LR 1600-2 crane. These measures would avoid double-handling of turbine equipment.

With the unloading complete, the second Sarens team began to erect the wind turbines, first using the LTM 1160 to assemble the LR 1600-2 crane that would be used for installation. The Demag AC 80 was also used to help assemble, and later dismantle, the LR 1600-2. The LR 1600-2 took four days to set up, test, and get ready to work. Each wind turbine to be erected included three 30-metre tall tower sections, three 63-metre blades, one 96-tonne nacelle, one hub, and one set of generator DTA tools. The LR 1600-2 in SL3F configuration lifted each part in place, thanks to its lift total of 105 tonnes at a 17 metre radius. After the team erected each turbine, the crane would be partially dismantled and moved to the next turbine, a process which took three days. The biggest challenge the 26-person team faced was high wind speeds, which sometimes made impossible to boom up the crane or proceed with a lift.