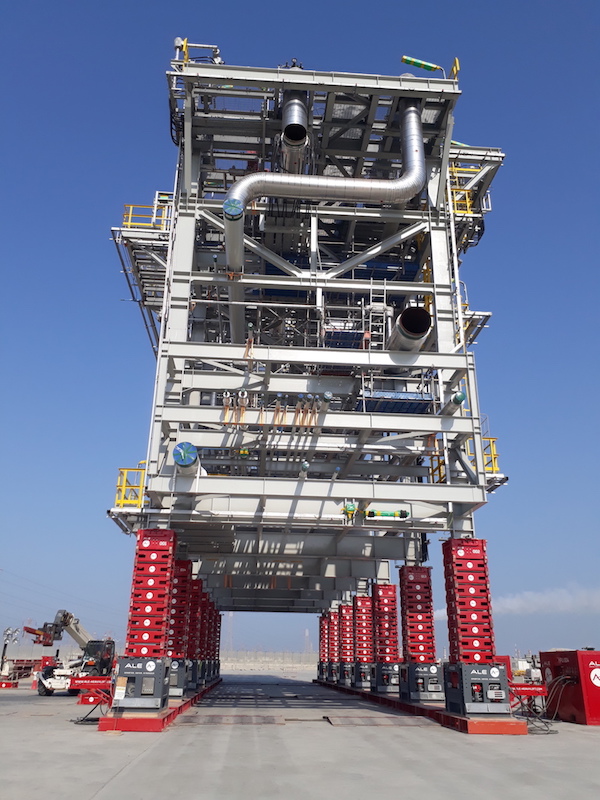 ALE’s Mega Jack 300 completed its 100th jack-up on the Al-Zafour refinery project in Kuwait, which is expected to become one of the largest in the world. ALE is providing the full onshore heavylifting solution for the Fluor Daweoo and Hyundai JV’s module strategy, performing the jack-up, transportation and installation of 188 modules.

The Mega Jack 300 was launched last year and with its 300t capacity it is the latest edition to ALE’s Mega Jack fleet. The Al-Zour Oil Refinery is its first operation. The Mega Jack 300 commenced work on the project in 2018 and previous lifts have included the longest and highest module ever jacked-up and installed in Kuwait.

Sarkis Juvelekian, Project Site Manager, explained, “The Mega Jack 300 is an ideal lifting solution for projects like this that need flexibility and speed from onsite equipment. The system is performing well, even in conditions with high utilisation in environments as harsh as Kuwait’s extreme heat and dust.”

The Al-Zour complex is divided into three projects and includes a refinery, liquefied natural gas (LNG) processing facilities, and a petrochemicals complex. The Al-Zour Oil Refinery’s completion is planned for 2020 and it is expected to deliver 615,000 barrels per day.