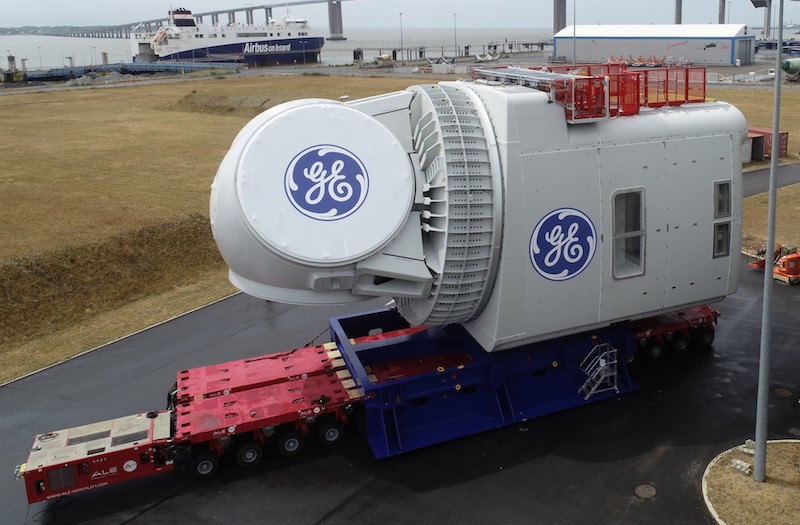 ALE has recently used its expertise in heavylifting operations and helped GE to unveil and test world’s most powerful offshore wind turbine, the Haliade-X 12 MW, capable of powering 16,000 European households. Featuring the world’s longest blades, it has a rotor span of 260m.

Transportation of the first Haliade-X 12 MW nacelle took place at its factory in Saint-Nazaire, France. It was moved via SPMT approximately 200m, from the factory in which it was manufactured to the yard. Two nacelles in total were transported by ALE and then loaded onto barges for shipment to Rotterdam, the Netherlands and Blyth, UK. Here, each nacelle will form part of a test installation – one on land, one at sea. The weight of the nacelles was borne by 32 axle lines of SPMT in a 16 x 4 file configuration.

ALE has also completed lift operations to test the yokes that are used to install the Haliade-X 12 MW blades at sea. The yokes – known as Blade Eagles – are 170t and have dimensions of 32m x 10.5m x 14m. To perform this testing, ALE provided a 150t-capacity LR1600 crane and a load cell in slings.

This testing lasted for three days in total, following which the blades were placed back into support frames and the Blade Eagles placed on the quay for later collection by a vessel.The Blade Eagle yokes will be used for all offshore installations of the Haliade-X 12 MW. The turbine as a whole will undergo testing with an aim of mid-2021 for its first commercial production.