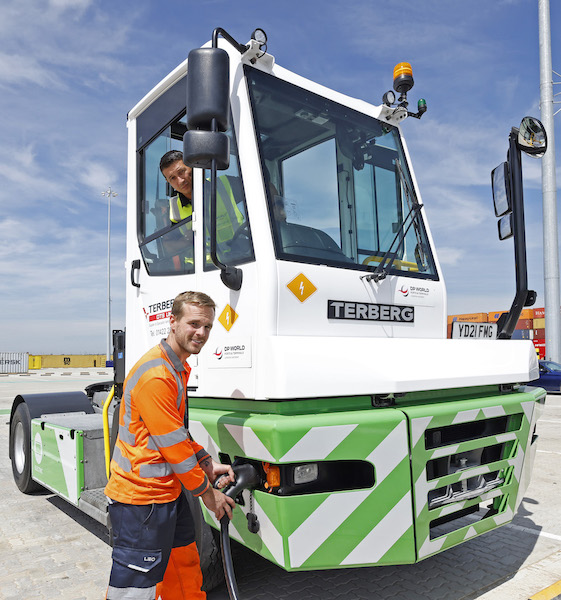 Ernst Schulze, UK Chief Executive at DP World, said: “We are delighted that Britain’s first all-electric terminal tractor is now in service at London Gateway port, as we continue to play our part in improving local air quality and helping the UK meet its target of delivering the Net Zero 2050 policy.”

“We have a clear responsibility to reduce the impact of our operations and to offer customers solutions that support their own sustainability journeys. The close proximity of London Gateway to Europe’s largest consumer market gives us a natural advantage, while our investment in rail interconnectivity at both our hubs eases congestion on the roads, with the emphasis on rail across both our UK ports taking 300,000 trucks off the roads each year.”

Earlier this month DP World announced that its container terminal at Southampton had become the first in Britain to eliminate fossil diesel from its operations entirely. By transitioning to Hydrotreated Vegetable Oil (HVO) net carbon dioxide emissions have been cut by more than 80 per cent.

Maha AlQattan, Group Chief People & Sustainability Officer, said: “We believe in protecting our people and our planet through world- class environmental standards and are delighted that our UK operation is at the forefront of this drive. Our sustainability strategy ‘Our World, Our Future’ is woven into everything we do supporting the UN’s Sustainable Development Goals across safety, climate change, security, community engagement, people development, ethics and wellbeing.”

The first all-electric terminal tractor at a British port is one part of DP World’s commitment to improving and expanding the nation’s trading infrastructure in the most sustainable way possible. The £300m sum which it is investing to build the new fourth berth at London Gateway – which could be 100 per cent electric when it is completed in 2024 – builds on the £2bn investment DP World has made in Britain over the last decade.