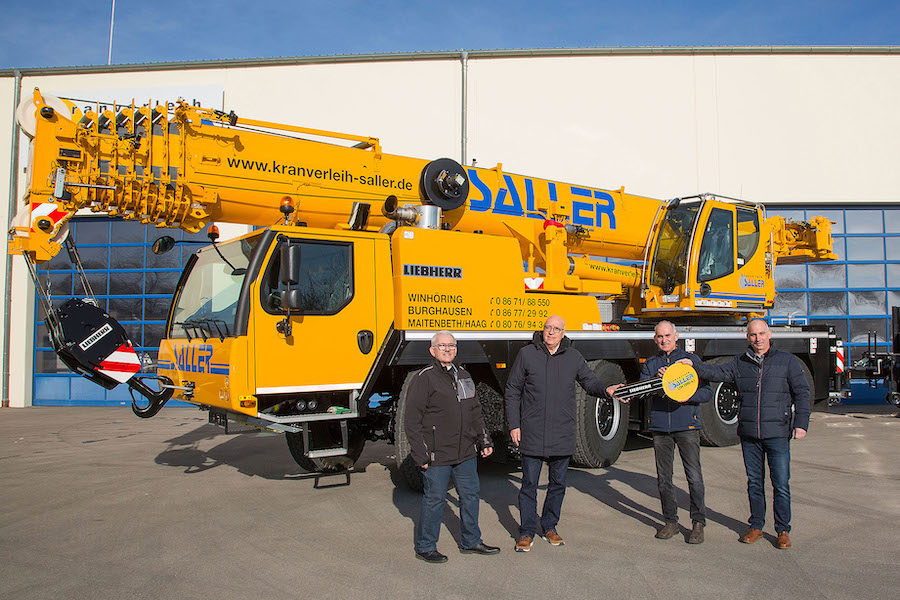 Kranverleih Saller GmbH has taken a delivery of a new 90 tonne Liebherr LTM 1090-4.2 at its head office in Winhöring in Bavaria. Initially, cranes in this capacity class had chassis with six axles. Technical progress means that the same performance is now possible from four- axle mobile cranes. The LTM 1090-4.2 features a 60 metre telescopic boom and thanks to its flexible axle loads it can be used economically throughout the world.

“This crane is now the fourth generation of Liebherr 90 tonne cranes our company has owned. The first, which we bought in 1981, was an LT 1090 truck crane on six axles with a 40 metre telescopic boom”, says outgoing Managing Director Johann Saller.

“The LTM 1090-4.2 with its 60 metre main boom and the ballast which it can carry within its 48 tonne gross weight is now the perfect machine for this lifting capacity class for our customers in the chemical industry”, he adds.

The LTM 1090-4.2 can travel with axle loads of 10 tonnes, 12 tonnes and 16 tonnes. As a result of its single-engine strategy, the reduced weight from not having a superstructure engine enables a longer boom and more ballast to be used with an axle load of 12 tonnes. The boom is 60 metres long, in other words ten metres longer than its direct predecessor, the LTM 1090-4.1. With an axle load of 12 tonnes, the new crane carries 8.8 tonnes of ballast, 2.1 tonnes more than its predecessor. That enables transport work and costs to be reduced in addition to its higher capacity. Thanks to ECOdrive and ECOmode, the LTM 1090-4.2 is eco-friendly and has lower fuel consumption and noise emission values. Its innovative VarioBallast system enables the crane to be operated with two ballast radii.