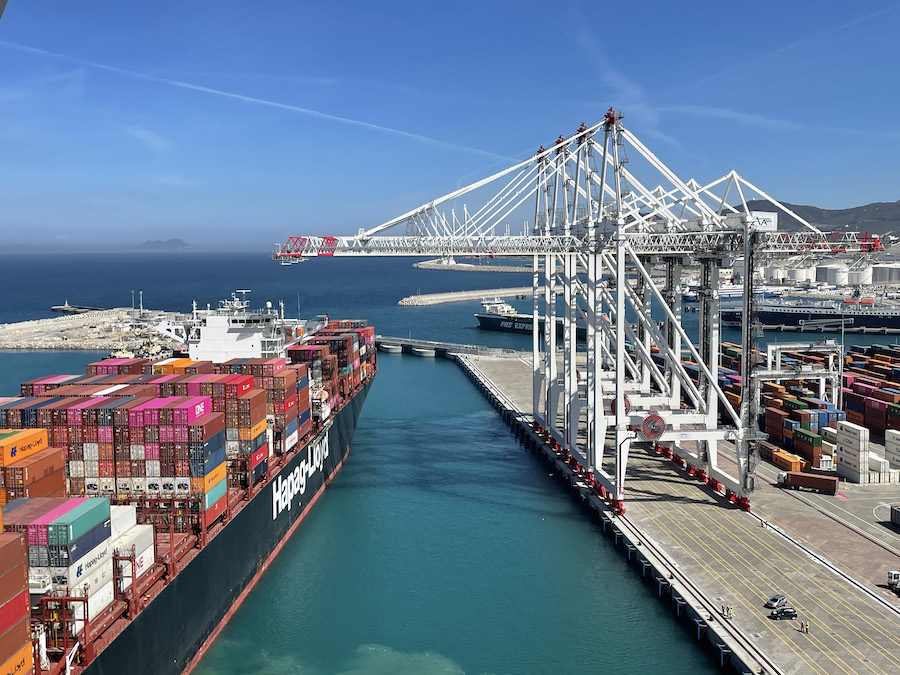 Tanger Alliance at the TC3 terminal in Tanger Med in Morocco have received the final two of eight Liebherr ship to shore container cranes. The final crane entered service in April 2021 and brings the operational capacity of the new terminal to over 1.5 million TEU per annum. The cranes, which are the first Liebherr STS at Tanger Med, were erected at a remote site in Cadiz, Spain before being shipped two at a time to Morocco. The first cranes were commissioned in October 2020, with four more following in quick succession, allowing the terminal to open for business in January 2021 with six STS cranes.

The cranes were designed and manufactured by Liebherr Container Cranes Ltd. in Ireland. They have an outreach of 72 m, a lift height over rail of 54 m, a span of 30.48 and a backreach of 22 m. Safe Working Load under twin-lift spreader is 65 t. The STS cranes can cater for vessels with up to 26 rows stowed across the deck and include fibre optic cores in the cabling, fault monitoring and remote diagnostics. Safety features including laser and ultrasonic anti-collision systems as well as smart slowdowns are installed as standard.

Liebherr Container Cranes contracted with ALE Heavylift Madrid (later Mammoet) to assist with the assembly and transportation of the cranes. The cranes were ordered between March and November 2019, with delivery scheduled to take place during 2020 and 2021. The cranes bring to twelve, the number of Liebherr STS cranes in Morocco with 4 cranes already in operation in Casablanca.