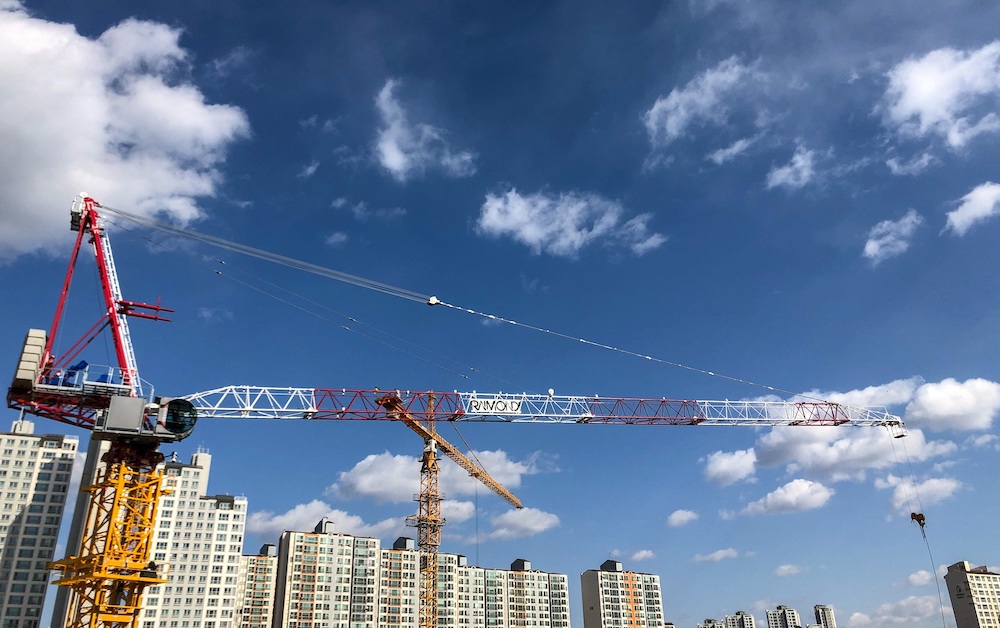 Raimondi Cranes SpA has appointed Korea’s La On as the country’s official dealer of its tower and luffing cranes and its range of crane accessories. The new agency appointment, effective from February 2020, was inaugurated with the sale of company’s first five Raimondi LR273 luffing cranes. Two of the new cranes are already at work participating in the construction of a noteworthy large-scale development in Dongtan, a newly-built city in the metropolitan area near Seoul. Upon completion, Dongtan New Town Xi Apartment Complex, will consist of 12 buildings made of 29 stories tall. With a total of 1,297 homes, this residential development will represent one of the largest residential complexes of the new city.

“These Raimondi LR273s were sold to GU Machinery Construction Corporation, who then contracted them to GS E&C. The latter is one of the biggest construction companies in Korea and its well known for its high standards in terms of jobsite safety. Therefore, the opportunity of placing the two cranes on GS E&C’s jobsite was an important step for positioning La On at the top of this segment market,” explained Seung Soon Park, Managing Director, La On.

“The purchase of the LR273s came with a significant challenge due to the country regulations. In fact, since this model was the first one to be used in Korea, we had to ensure that the Raimondi luffing crane complied with a series of norms to officially operate in the region. This included a series of strict inspections and obtaining the approval process from both the government and the construction company. We consider the Raimondi LR273 as a milestone for our company and the Korean heavy lifting industry, and we are using this opportunity to reintroduce Raimondi as one of the strongest European brands in Korea,” he continued.

The Raimondi LR273, a weight-optimized luffer, has 18t maximum capacity and is ideal crane for clients requiring a machine that is easy to install. Chosen for their tip load at 60m, the LR273s are at work with jib lengths of 55m and 60m, and a free-standing height of 44m that will be later climbed up to approximately 100m. The three remaining LR273s are expected to arrive in Korea by quarter one of 2021, while an additional five cranes will be delivered in the upcoming months as part of the first main batch of 10.