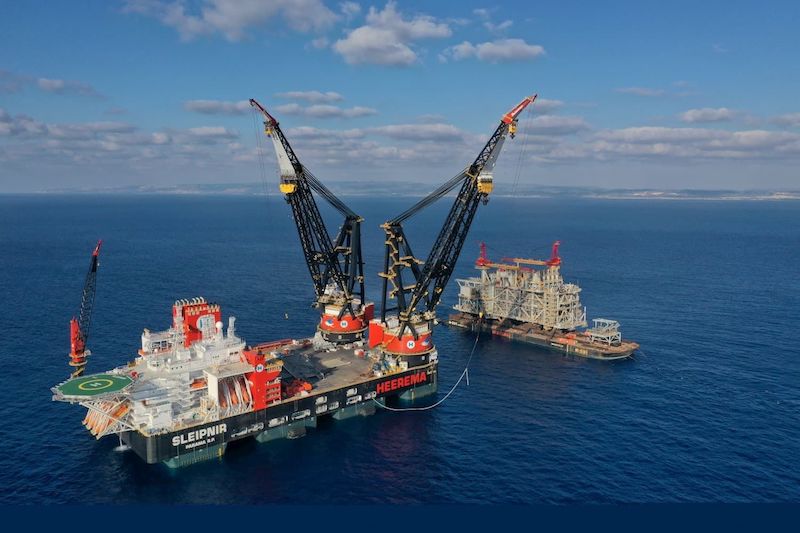 Sleipnir, the world’s largest semi-submersible crane vessel, has arrived in the Port of Rotterdam on Sunday, March 22. The construction of Heerema’s Sleipnir was completed in July 2019 and since then, the vessel has been busy across the globe. Named after the Norse God Odin’s eight-legged stallion, Sleipnir stands at 220 meters long, 102 meters wide, can accommodate 400 employees, and weighs 119,000 tons. The semi-submersible vessel has two cranes onboard, each capable of lifting 10,000 metric tons, making it suitable for the largest offshore jobs, such as building wind turbines at sea, dismantling old platforms, or constructing the most significant offshore structures. Sleipnir has already broken lifting records for crane vessels with a 15,300 lift in September 2019. Due to its two large streamlined floats, it can sail on average, twenty kilometers per hour with limited fuel consumption. One of the particularities of the vessel is that it has ‘dual fuel’ propulsion and can, therefore, run entirely on the emission-reducing fuel LNG.

Sleipnir arrived following a successful project execution in Trinidad, having already worked in Brazilian and Israeli waters and will depart in the coming weeks for the first of its several jobs across the North Sea.