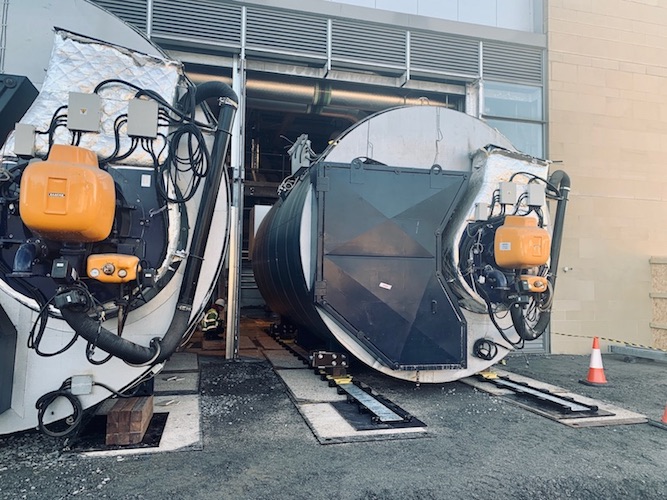 Heavy lift specialist, Ritchie Services, relied on an Enerpac skidding system to remove two large 70-ton boilers from a custom-built boiler house with only 15mm headroom at Alderley Science Park in Cheshire, UK. The Enerpac LH-400 low height skidding system allowed the boilers to be removed from the building without the need for major engineering work to the low roof and surrounding pipework.

“Removing the roof to allow access for heavy lifting equipment would have meant working at height and taken a good deal longer. Our biggest problem was the limited working space with just 15mm between the top of the boilers and the building’s roof. The low-height skidding system easily fitted under the boilers and was fast too, allowing travel of over a meter every five minutes,” says Iain Ritchie, managing director, Ritchie Services.

The Enerpac low-height skidding system is a modular system comprising a series of skid beams moved by hydraulic push-pull units, traveling over a pre-constructed track. A series of special PTFE-coated pads are placed on the skid tracks to reduce friction. The push-pull units are powered by a standard Enerpac Split Flow Pump to ensure each skid beam travels synchronously.