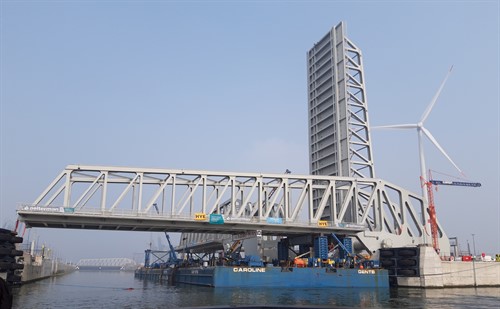 Sarens recently completed the installation of two new bridges across the Kieldrecht Lock (Belgium). This lock, also called the Deurganckdok lock, is the largest in the world since its opening in 2016, and allows access to the Port of Antwerp. In order to transport and install the two elements Sarens used the barge “Caroline”. Thanks to this method, the lock was blocked only a minimum of time. Each of the two bridges measured 100m long by 15m wide and weighed 1600t. Dimensions that limited the working space on the barge. However, it took several manoeuvres to rotate the two bridges while they were on the barge. Finally, the strict tidal restriction for one bridge was also a crucial factor. The Sarens team used its CS1000 jacking system, steelworks, and SPMTs as well as the barge and various related marine equipment. Thanks to the careful planning and execution of the different stages, Sarens was able to successfully transport and position the bridges across the Kieldrecht Lock on time.