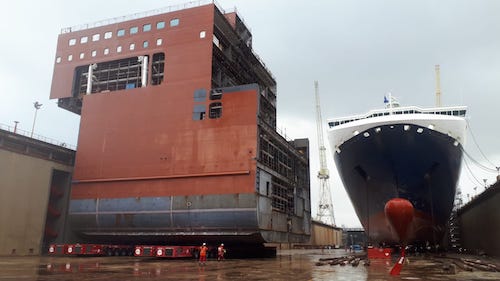 Ale has been tasked to lengthen the Grimaldi Roma cruise ship in Palermo, Italy. To install the new section, weighing around 2,540 t, Ale deployed skid shoes varying from 500 t – 1,000 t capacity, along with 96 axle lines of SPMT in a configuration of 4 x 2 file 24. The new section was transported by SPMT’s, while the ship cut section, weighing around 10,500 t was skidded across skid tracks so the new section could be installed. The ship originally measured 225 m and once the new section was installed another 30 m was added onto the ship.
Ale has been contracted to lengthen two cruise ships, the Grimaldi Roma and Barcellona. The project started in late 2018 and is expected to be completed by the end of June 2019.