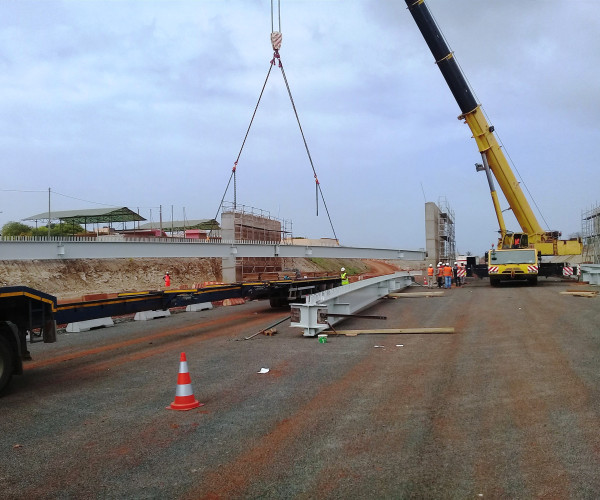 As a part of the “Emerging Senegal Plan”, launched by the President of the Republic and the Government of Senegal in 2014, the French company Eiffage has engaged the services of Bolloré Logistics for the Regional Express Train construction project that will connect Dakar city center to Blaise Diagne International Airport (AIBD) in less than one hour. The new railway will have two lines for passengers and an additional line uniquely used for freight transportation. Bolloré Logistics teams are in charge of the logistics operations of out-of-gauge packages, that contain 36-meter beams and 34-meter gateways, from discharge at port of Dakar to their delivery to the construction site in Bargny. These pieces, coming from Antwerp in Belgium, will be used for the construction of 11 routing bridges and 16 walkways between Bargny and Diamniadio.

The first six beams, measuring 36m in length and weighing 10 tons each, were delivered to the construction site in September and were discharged with two cranes of 40 and 50 tons. To transport the heavy lift cargo, two convoys with an extra-long trailer and a telescoping of 40-meters were required.

The duration of this contract should extend to the end of June 2019.