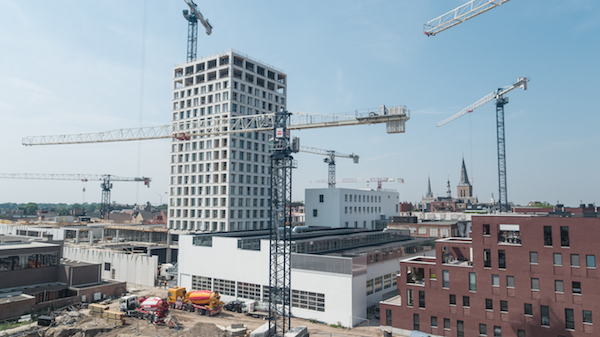 In Turnhout, Belgium, multiple apartments buildings and a museum are under construction and will form the Turnova District. To erect them, the Dutch crane rental company Stravers Torenkranen B.V has been chosen on behalf of the construction company Interbuild N.V. They are currently using six Terex flat-top tower cranes to do so, including two CTT 332-16 and four CTT 231-10. The first one has a 16t maximum lifting capacity and 3t at maximum length, with 75m of jib length. The second flat-top tower crane can lift until 10t and 2t at 70m high. To bring the cranes to the job site, Stravers used 72 trucks from its location in Veghel, in the South of Netherlands. A team of four people erected the six cranes during six full days. They will stay on site during a year and a half to lift prefab components, building materials and concrete buckets. The Owner and General Manager from the Dutch company, Berry Stravers, explained why he chose the CTT. “There were two reasons why we decided to only use Terex cranes for this work site: Firstly, they had the required lifting capacities. Secondly, it was remarkably easy to position them in an overlapping arrangement on the available space.” In total, almost the entire Stravers fleet is made up of Terex tower cranes (120 on 130).