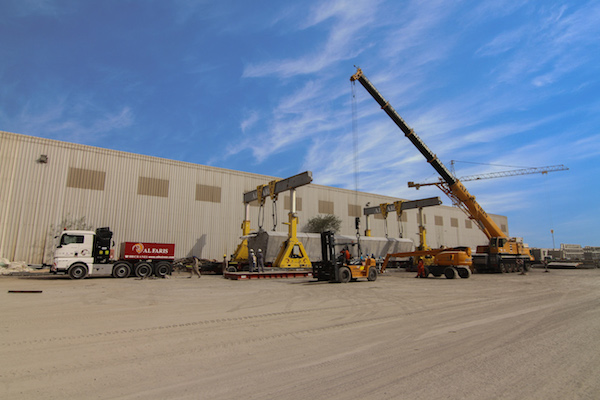 Following previous operations on the Dubai Metro Lines, the heavy lifting and transport specialist Al Faris, based in Dubai, handled the loading, transporting and lifting of precast girders weighing 426 t.

After careful calculations and precise analysis, it was decided to use a gantry system for lifting the girders due to problems caused by the confined space restrictions. At first the precast girders were loaded using a SBL900 gantry system on its 19-axle Goldhofer THP / SL trailer connected to a 680 horsepower heavy duty prime mover. The gantry was set up with a Liebherr 100t all terrain crane and forklift. The precast girders were then lifted and erected on the metro column by a 650t crawler crane with SSL2 configuration and 42m main boom. All the operations were performed at night to avoid road traffic and other obstacles.