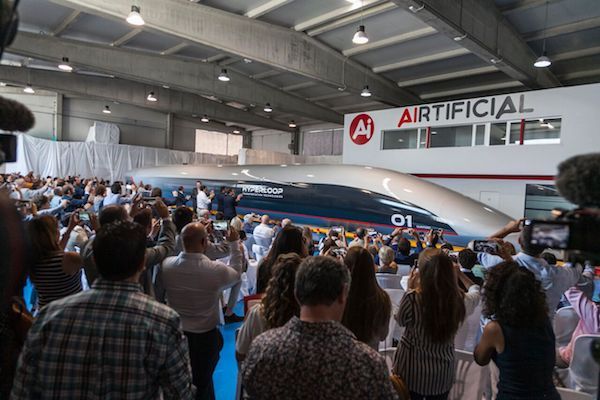 On the Spanish site of its aerospace industry partner Hyperloop Airtificial, the company of transport and innovative technology Hyperloop Transportation Technologies just unveiled its new passenger capsule named “Quintero One”. 35m long and weighing 5t, it is almost entirely built with Vibranium. This material (referring to the shield component of Captain America in the Marvel movies !), is a smart composite double layer especially engineered by the company initiated by Elon Musk in 2013. Its design has been elaborated together with Priestman Goode, a consulting agency based in London and China which won the gold medal of the London Design Awards 2017. It will be delivered in the Research and Development Center of Hyperloop in Toulouse, France, to be assembled and integrated to the system, which will enable to transport passengers and goods at very high speed. Dirk Ahlborn, co-founder and CEO of Hyperloop TT, also explained its company’s progress. “Within just five years, we improved and resolved all the issues caused by technology required by Hyperloop with our new levitation system, our vacuum pumps, our batteries and our smart composites. This capsule will be one of the most efficient transport systems ever developed.”