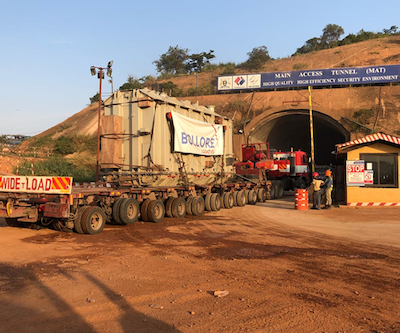 Bolloré Logistics teams from Uganda and Kenya have collaborated to transport construction equipment items for a major project in Uganda. In 2015, Chinese Group Power China, whose subsidiary Sinohydro specialises in the construction of dams, began the construction of the Karuma power station, the first underground hydropower plant with a capacity of 600 MW. Located on the edge of the Nile, in northwestern Uganda, the country hopes to meet the growing demand for electricity with this project. In October 2016, Bolloré Logistics ensured the shipment of the trucks carrying the goods, as part of the contract including unloading and transport from the port of Mombassa (Kenya) to the Karuma yard (Uganda), 1,285 km in 12 days. As a part of the same contract, in 2018, the international transport and logistics specialist transported and unloaded a 98-ton container to the 15 km long and 450 m deep tunnel. The tricky part of this task was the accessibility and means of movement in a narrow tunnel with a inclination of about 12 degrees. Thank to the adapted solutions, such as the deployment of a rail system access, tilting of the container or the moving of trailers in reverse, the entire transport was carried out without accident.  Today, 85% of the work has been completed and the project will be finished in 2019.