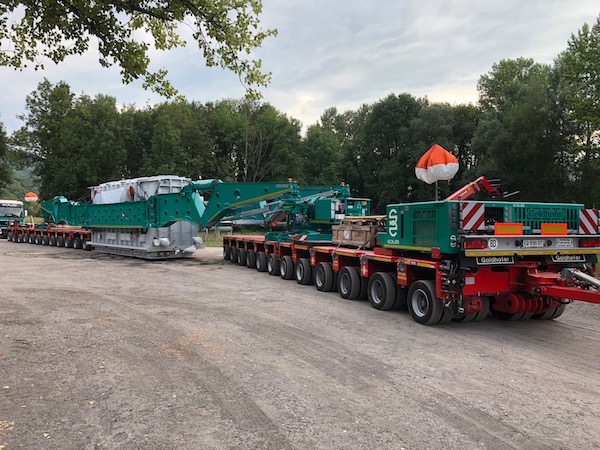 In August 2018, the french haulier Scalès took over a 210t Royal SGB-SMIT transformer through Isère and Rhône-Alpes region. To do so, it called on expertise of the German company Greiner, specialized in the manufacture of trailers and heavy transport solutions, which provided a transport system with high girder bridge. This “KBH 225” helped to go through the most narrow passages, mountain villages, particularly in narrow mountain villages where only a few centimeters between buildings and the transport train was available. The manufacturer realized a novel hydraulic-mechanical articulated arm extension, similar to a hinge system and acted as a bridge. It linked two trailers, with a 2×14 axle lines combination, a maximum load up to 225t and a 1,8m lift. The other particularity of this transport was the versatility of the bridge thanks to its modular conception. Retrofitted with z-girders, a low-girder version could be used during the journey. The full article is coming in the next issue of the Move It Magazine !