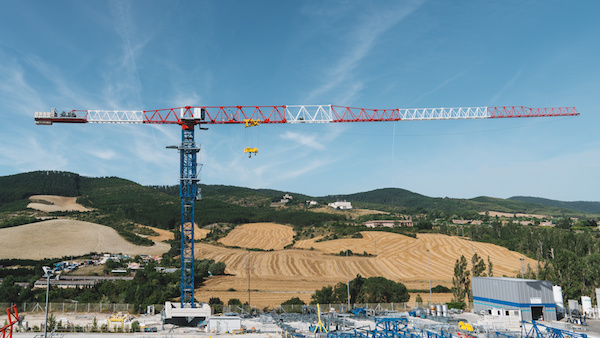 The Spanish tower crane manufacturer Comansa just launched a new flat-top model, available in three versions of maximum load (25, 37,5 and 50t), with a reach between 30 and 80m and up to 85m with a special boom configuration. Its maximum load of 50t makes the 21LC1050 the biggest Comansa 2100 Flat-top of the range. As the main novelties, its counter jib design has been modified among other things, to allow many configurations in order to adapt itself to the needs of each jobsite. Indeed, a shorter counter-jib avoids risks of interference with other cranes or buildings. This machine is also fitted with a new cab CUBE in XL version with the front fully glazed, which offers a better use comfort for the operator. As the previous Comansa flat-top cranes, the 21LC1050 is supplied in standard version with the Powerlift system, which improves the input/out diagram of 10% and not exceeding its working load limit. This way, if the final charge of the 25t model is up to 10,8t, when the crane operator activates the Powerlift system from the cab, the maximum load on jib end reaches 11,88t.