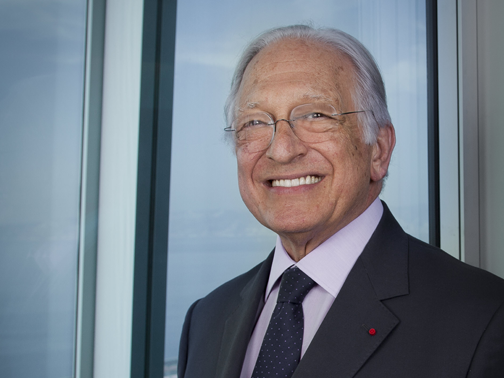 Jacques R. Saadé, the Founding President of the CMA-CGM Group, a global shipping giant, has passed away on the 24th of June at the age of 81. After leaving Lebanon with his family during the Civil War, Jacques R. Saadé founded the Compagnie Maritime d’Affretement (CMA) 40 years ago, on 13 September 1978.

He began with four collaborators including his brother-in-law and right-hand man Farid Salem, initially with a single ship and only one maritime service between Marseille and Beirut.

Over the years, he developed his company to become one of the leaders in container shipping.

Among the major stages of the group’s development, there was notably the acquisition of the Compagnie Générale Maritime in 1996 and Delmas in 2005. Two acquisitions that allowed CMA -CGM to reach the place of the third largest container shipping company in the world, a place that the group has never left since. A man with strong ties to the city of Marseille, where the Group was founded, Jacques R. Saadé built the CMA CGM Tower in 2006, the new headquarters of the Group and now a symbol of the city of Marseilles.

In 2015, Jacques R. Saadé, was conferred the title of Commander of the French Legion of Honor by the President of France.

On 7 February 2017, on his 80th birthday, he appointed Radolphe Saadé to the position of Chief Executive Officer of the CMA CGM Group and then appointed him Chairman of the Board of Directors on the 24th of November, the same year.